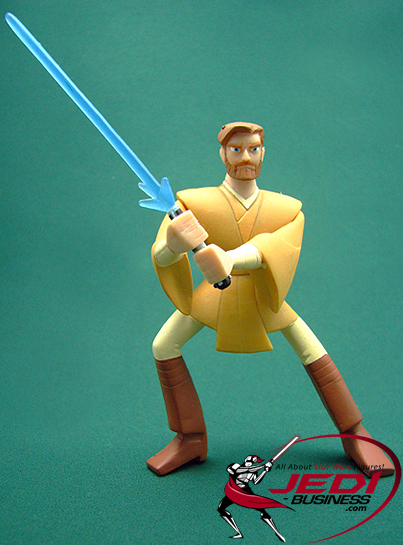 This cartoon-style version of Obi-Wan Kenobi was released in 2005 in the Walmart exclusive Commemorative DVD 3-pack Collection 2, together with Commander Cody and General Grievous. The figure is based on Obi-Wan Kenobi's appearances in the later episodes of the Tartakovsky Clone Wars cartoon.

Obi-Wan is a re-release of the previously released Obi-Wan Kenobi figure. However, the head sculpt is new and the paint application has been altered. The limited articulation is the same however, with only 4 joints, including a swivel neck, 2 swivel arms and a swivel waist. Just like the previous released Kenobi, the figure stands pretty shaky, and you very likely will need the included stand to balance it out. The only weapon included with Obi-Wan was his blue lightsaber, which fits well into both hands.

The paint application is cleanly applied and Hasbro used stronger colors than on the first release. However, it's still nothing out of the ordinary. The head sculpt captures the likeness of the more Episode III looking cartoon character quite well, but because of the pre-positioned legs and lack of articulation, there is not much you can do with it.

Like with all the figures in the Tartakovsky Clone Wars series, this Obi-Wan Kenobi figure was clearly made for children.