The packaging was designed to stay in-fantasty to fit into the world of Batuu, there is no branding on it. 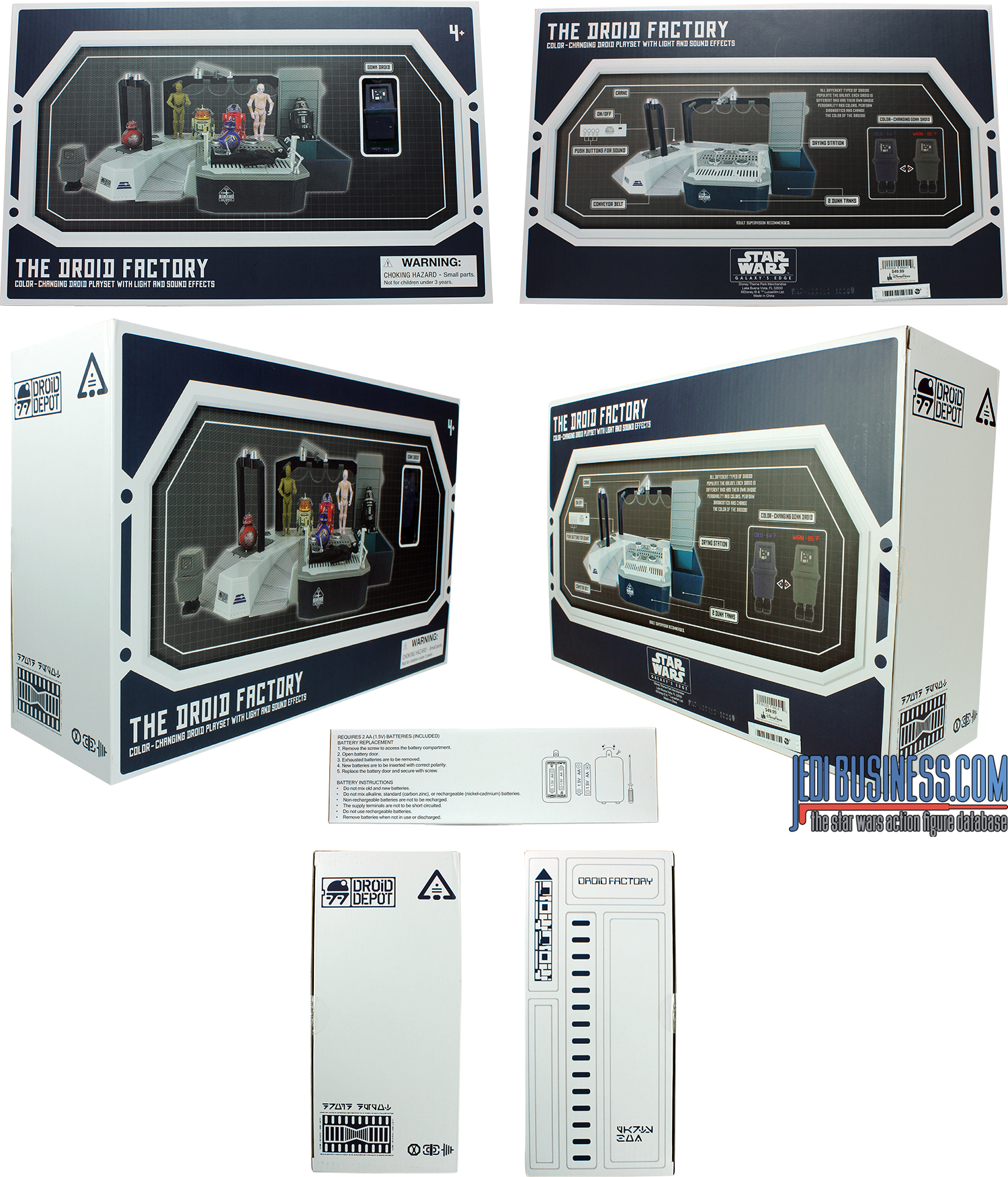 Here is what the Droid Factory Playset looks like fully assembled with additional color-changing droids added. The entire set looks cool on display. There were no instructions included but the assembly is straight forward. The doorway by the conveyer belt, the arch in the back and the basin on the bottom need to be plugged into the base. The water basin on the front and on the side of the playset don't attach, they are simply placed next to the base. 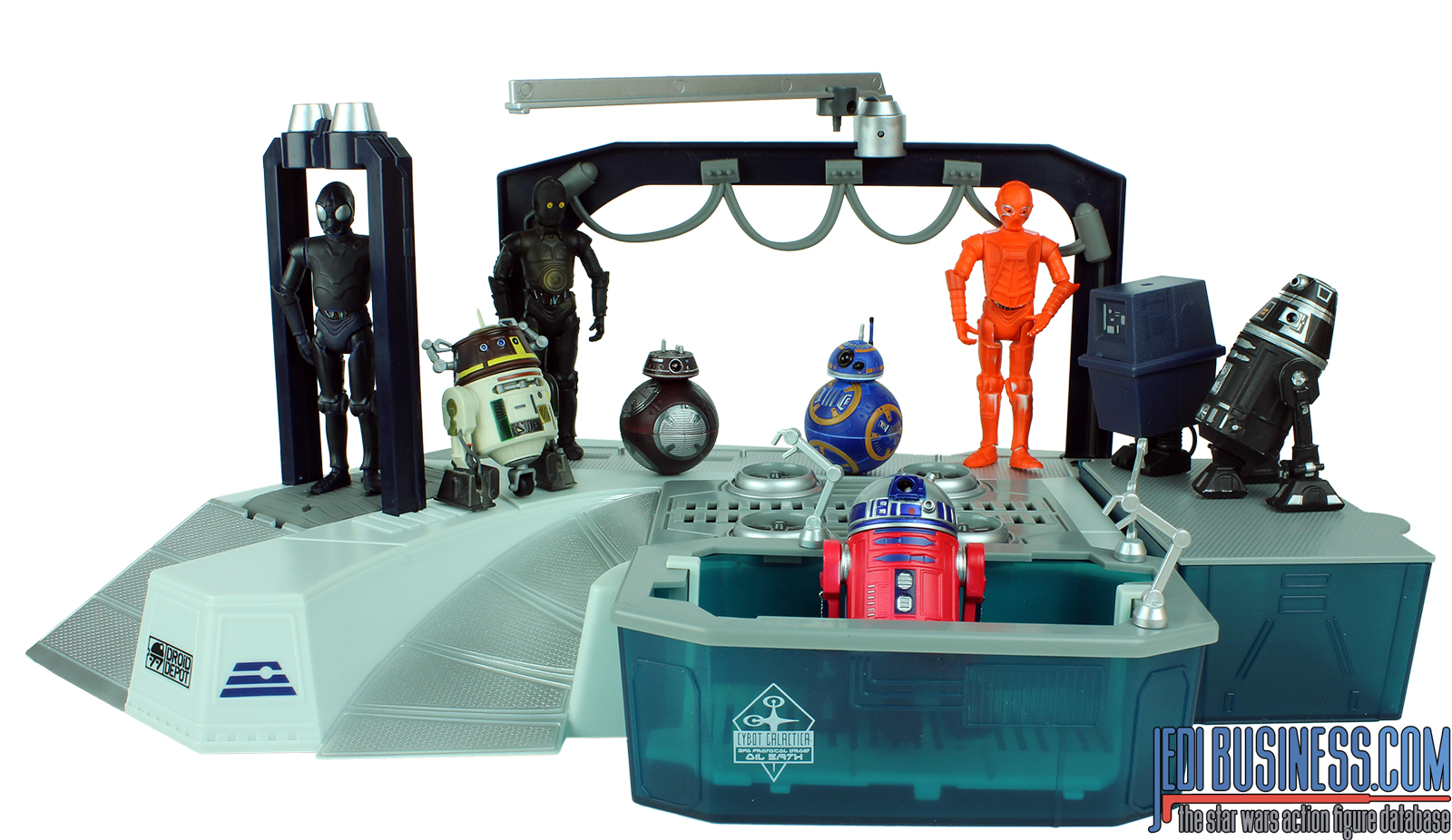 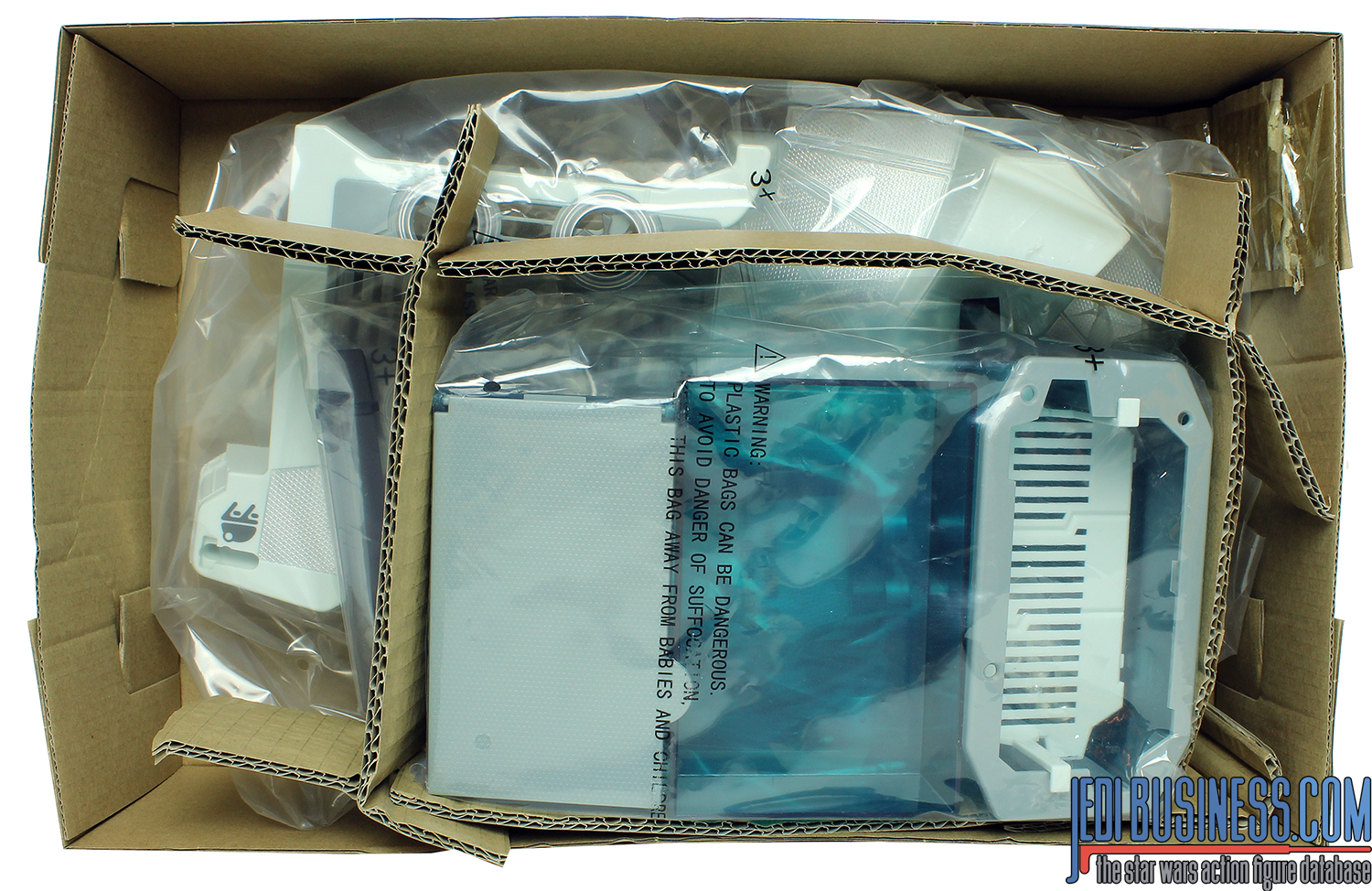 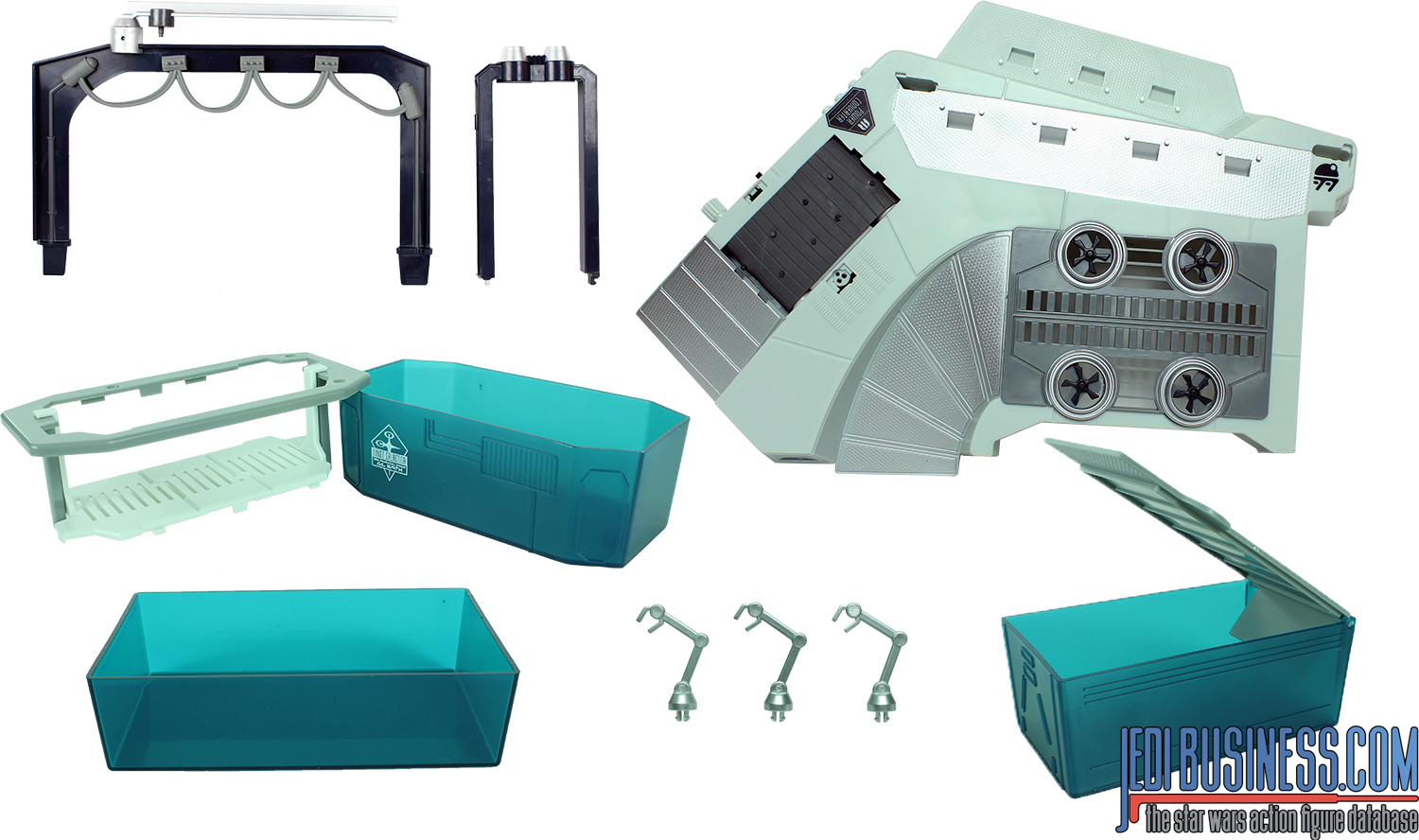 There are four buttons on the side of the Droid Factory Playset, each button plays several different sounds. The sounds range from droid beeps to machinery noises. The conveyer belt can be manually moved by rotating the knob next to the sound buttons. When you turn the knob the conveyer belt moves, the sounds get triggered and the blue light in the door way turns on. The blue light either stays lit or flashes rapidly which looks cool.

You can listen to the Droid Factory Playset sounds here:

The crane in the back can be moved left and right and back and forth manually. The crane's arm has a peg where the domes of the astromech droids can be plugged in, this way the crane can lift droids around the playset. This is all done manually and there is no motorized functionality here. The crane is strong engough to keep all the astromech droids up in the air effortlessly, but unfortunately it's impossible to lower any of the droids into a water basin with it because the arm can't be lowered.

The drying station in the middle has holes in it so that the water from wet droids can run down into the basin underneath. Even though the vents can be moved by hand there is no button which turns on a fan and the droids need to dry by themselves. The base has pegs for droids to stand on in the back and on the conveyer belt. 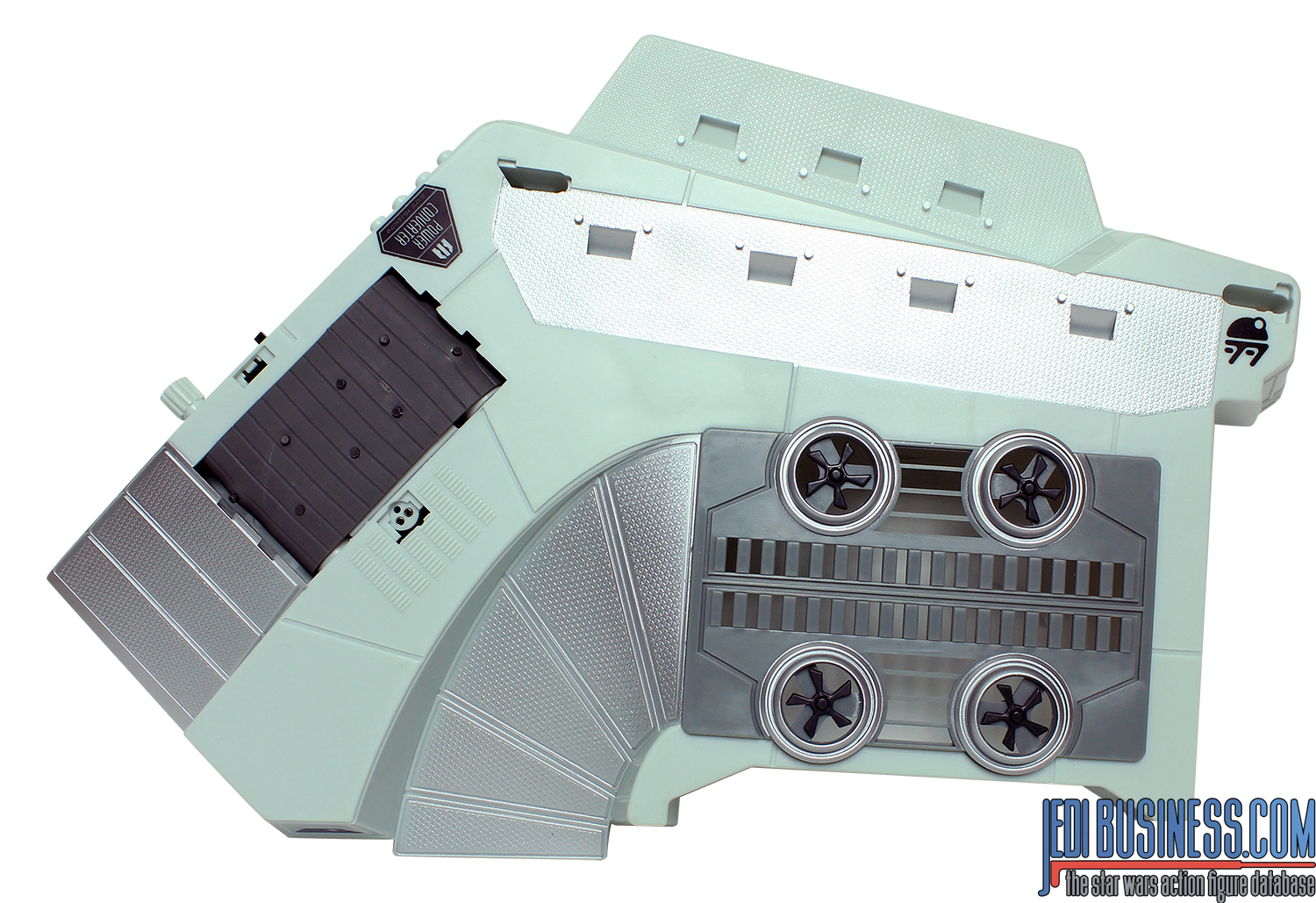 The Gonk Droid's color changes based on the temperature, this can be achieved by placing it in cold or warm water, or by simply placing it  into the freezer or heating it up with your fingers or even a hair dryer. The recommended temperature mentioned on the packaging for the color change to occur is 86° to 107.6° Fahrenheit (30° - 42° Celsius) and 32° - 64° Fahrenheit (0° - 18° Celsius). The included Gonk Droid changes its color from blue to grey. 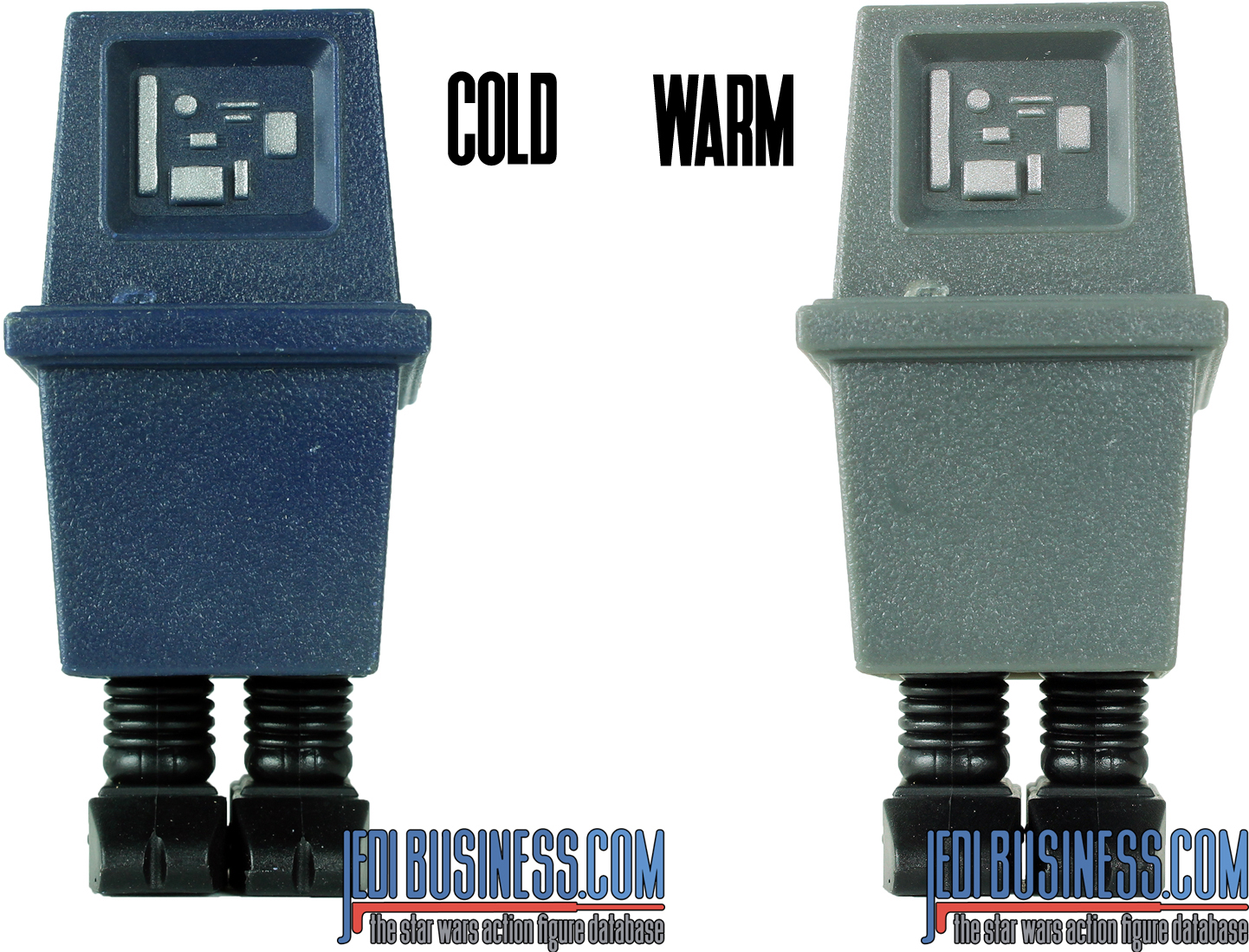 The Droid Factory Playset is fun, it's cool to see the droids change colors so drastically and it makes for fun "spy-play" when droids can disguise themselves. The sounds are fun too and the lights add an extra wow effect. For collectors the Droid Factory Playset makes a fun display piece and kids can have fun playing around changing the colors on all the droids. The $49.99 price tag feels justified when compared with other similar products on the market (e.g. Jabba's Palace Adventure Set), especially considering that this is being sold exclusively at Disney's Galaxy's Edge, and there is always a premium for items sold at Disney Theme Parks. If you are looking for a cool display piece for your droids in your collection or a fun toy for the Star Wars fan in your family, then take a look at this set next time when you are at the marketplace on Batuu! 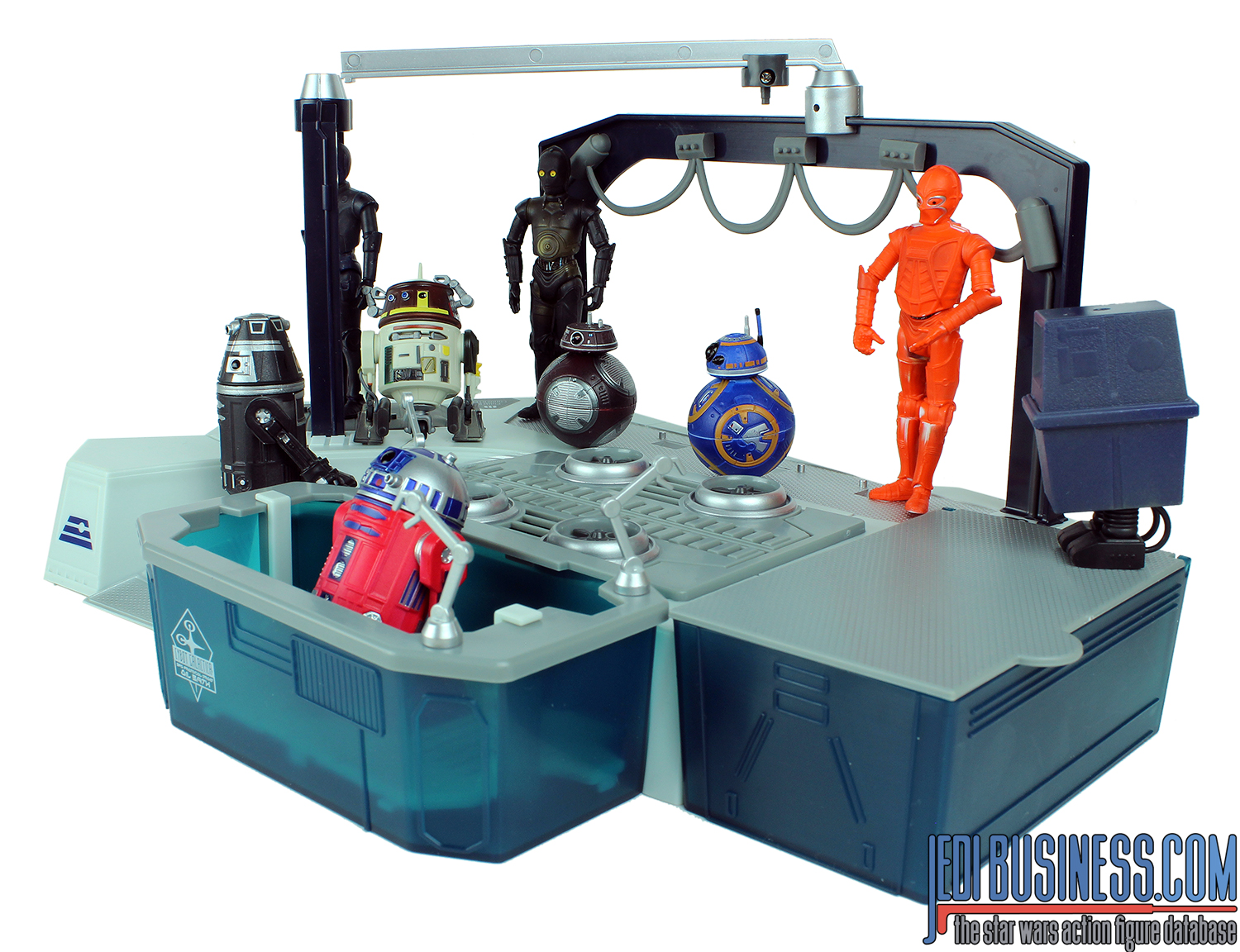