The re-imagined Star Tours attraction, Star Tours - The Adventure Continues, opened at Disney's Hollywood Studios on May 20, 2011. This was the perfect opportunity for Disney to finally release one of the most requested toys based on the ride, the STARSPEEDER 1000 vehicle, and on December 2nd, 2011 they finally revealed it to fans.

In early 2012 the STARSPEEDER 1000, which is fully compatible with Hasbro's 3.75" Star Wars action figure line, was finally released at Disney World, FL and Disneyland, CA for $54.95. The set included an exclusive R2-D2 astromech droid, an IC-360 Cam droid figure, 4 sound discs and a removable pilot chair.

The STARSPEEDER 1000 has a lot of electronics built-in and all the dialogue and sound effects were taken directly from the Star Tours ride. There are four buttons on the back of the vehicle, the top two buttons open the passenger doors, they activate the cabin lights, and they play the iconic boarding chimes from the attraction (this is amazing!). The bottom right button plays C-3PO saying "Lightspeed R2 - NOW!" followed by some lightspeed sounds. The bottom left button plays the sounds based on what destination disc was inserted. 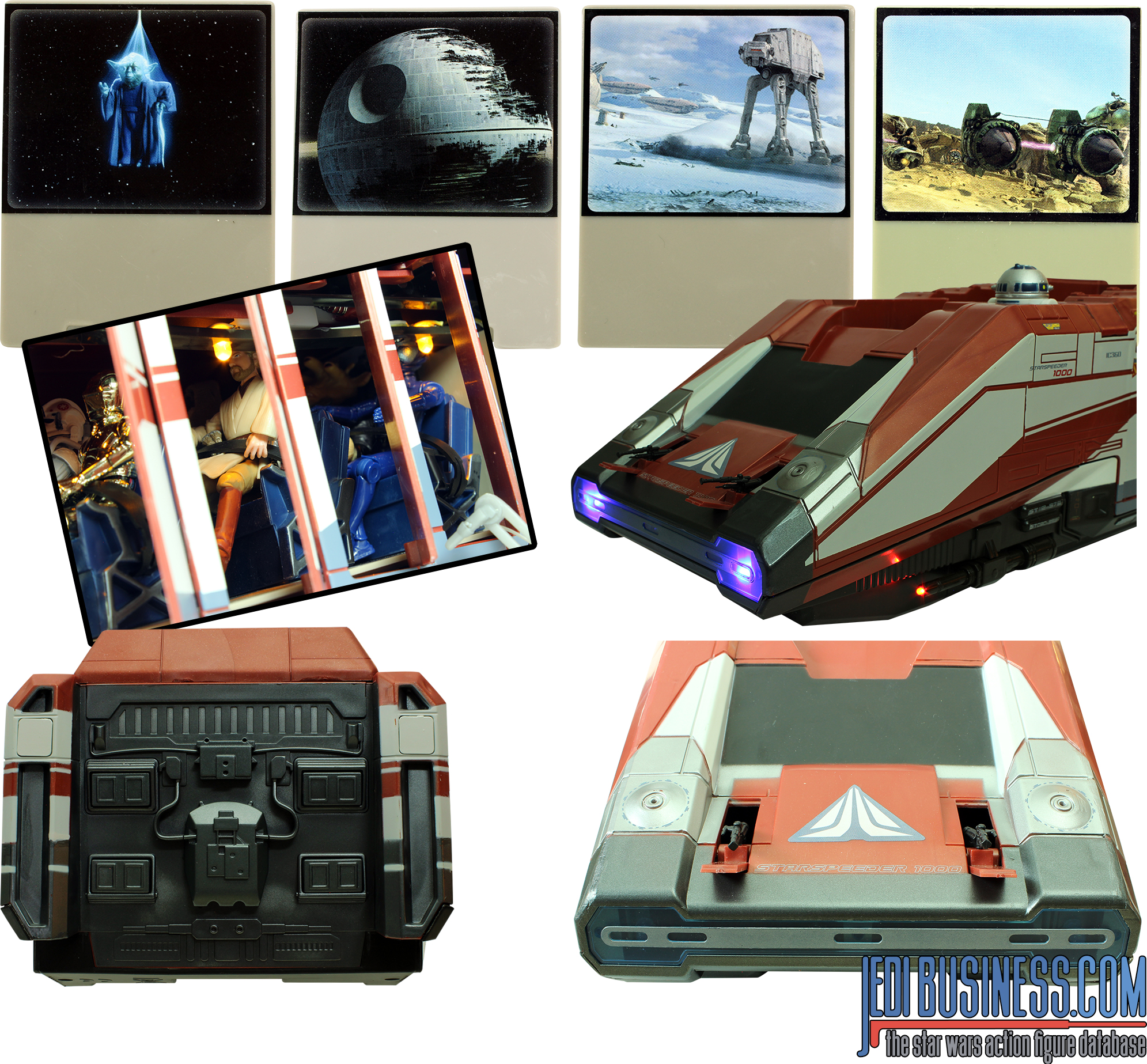 When R2-D2 is pressed down into his socket it will play various beeps from the droid and the button on top of the cockpit which is located on the vehicle's hull will move out the laser cannons in the front, light up red laser lights and make firing sounds.

You can listen to all the sounds here:

Here is a look at the two included figures and where they can be stored on the STARSPEEDER 1000. R2-D2 is the same height as any other Disney Build-A-Droid or Hasbro 3.75" astromech droid but it's hollow inside and the only movable part is the dome which can be rotated. The legs and the ankles aren't articulated and there is no third leg. The astromech droid slot for R2-D2 can house any other 3.75" scaled astromech droid. The IC-360 cam droid looks great but unfortunately there wasn't a display stand or pole included so that it could be displayed properly away from the vehicle. 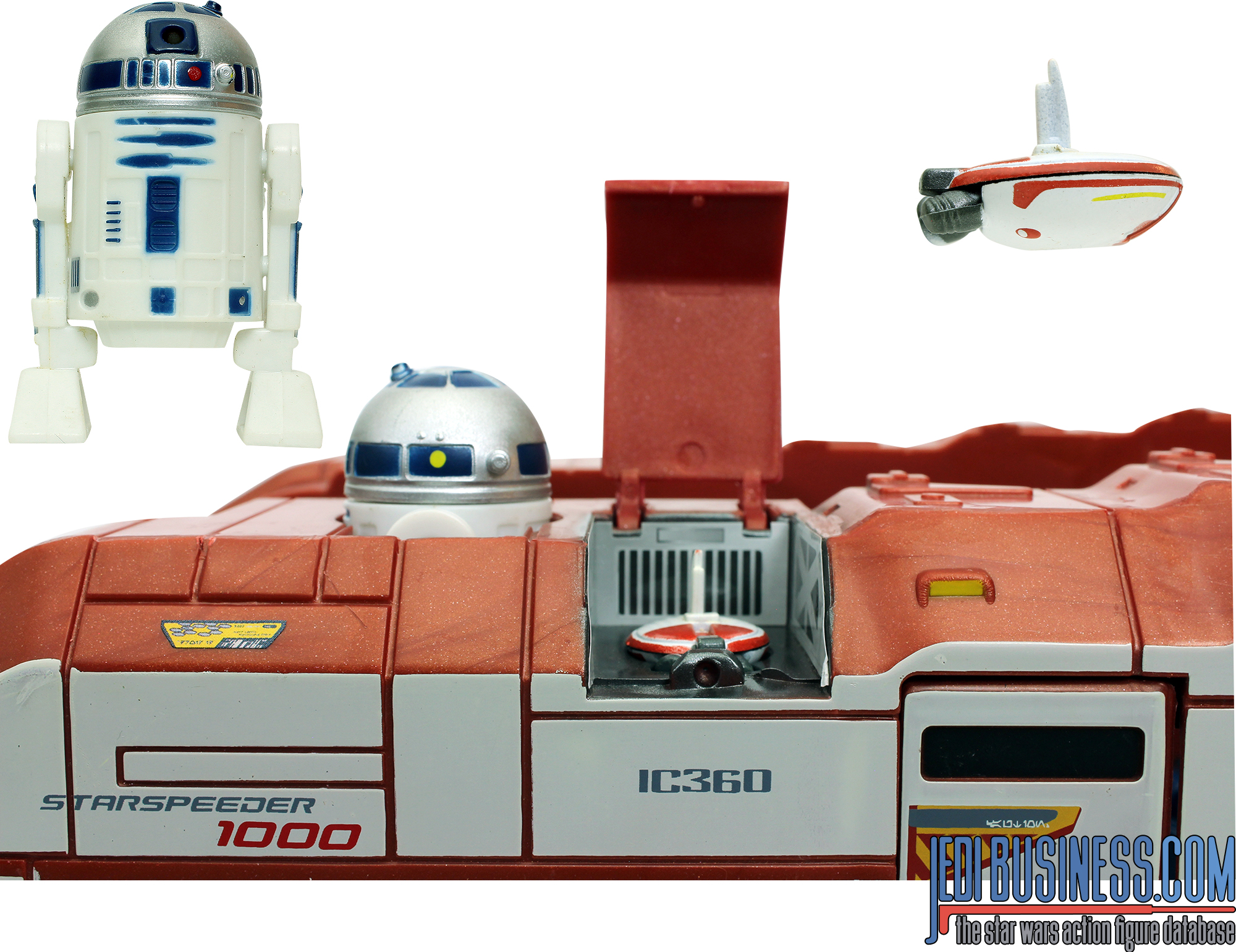 The Star Tours ride can seat 40 passengers, the toy can hold nine 3.75" Star Wars figures and a pilot. The front of the cabin has enough room to either seat a figure like C-3PO onto the pilot chair, or when the pilot chair is taken out, then there is the exact space left to fit Captain REX "RX-24" in. It takes a while to get all the figures seated but we had no issues doing so. There is enough leg room so that figures without knee articulation can sit as well. The size of the STARSPEEDER 1000 is impressive, it measures approximately 19 inches long, 7 inches wide and 7 inches tall. The details on the hull and on the inside are impressive all around.

On the inside of the cabin, behind the last row, is storage space where all the unused destination discs can be stored. 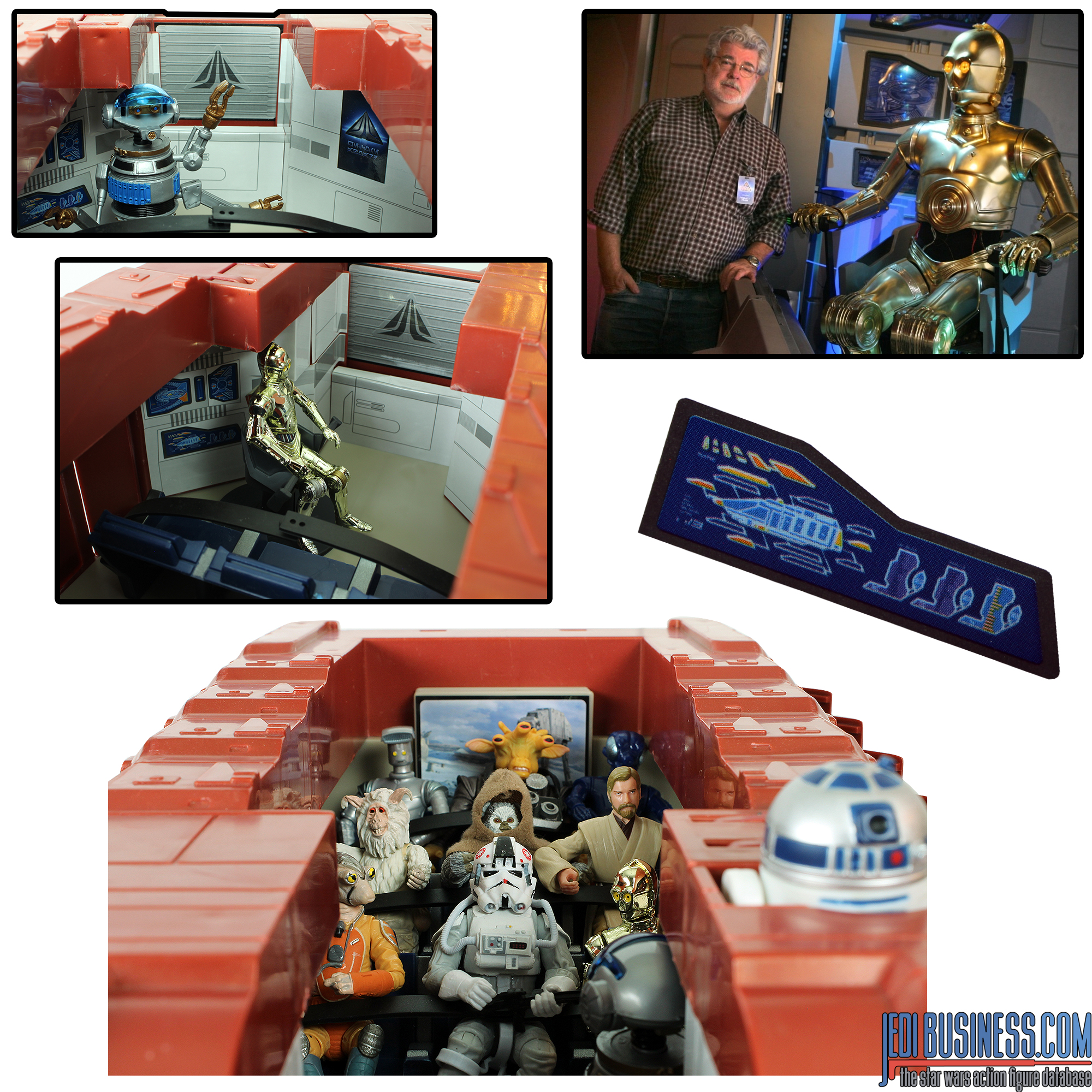 In late 2015 when Star Wars: The Force Awakens was released in movie theaters, Disney went ahead an updated the ride to include a scene from the movie in the actual Star Tours ride. Disney also updated the packaging for the STARSPEEDER 1000 and they changed the podracing image on the destination disc to a Force Awakens image. The sound bite however was not updated and stayed the same for the disc. The price jumped by $20 from the original $54.95 to $74.95.

We are in love with the STARSPEEDER 1000, it's a wonderfully scaled-down version for 3.75" Star Wars figures of the popular STAR TOURS ride. It has it all, exchangable destinations via destination discs, room for C-3PO or Captain Rex RX-24, it has the sounds and phrases from the ride, there are lights in the cabin and on the front, there is enough room to sit figures, the paint deco on the inside and on the hull look good, the details in Aurabesh look cool, it really has it all. 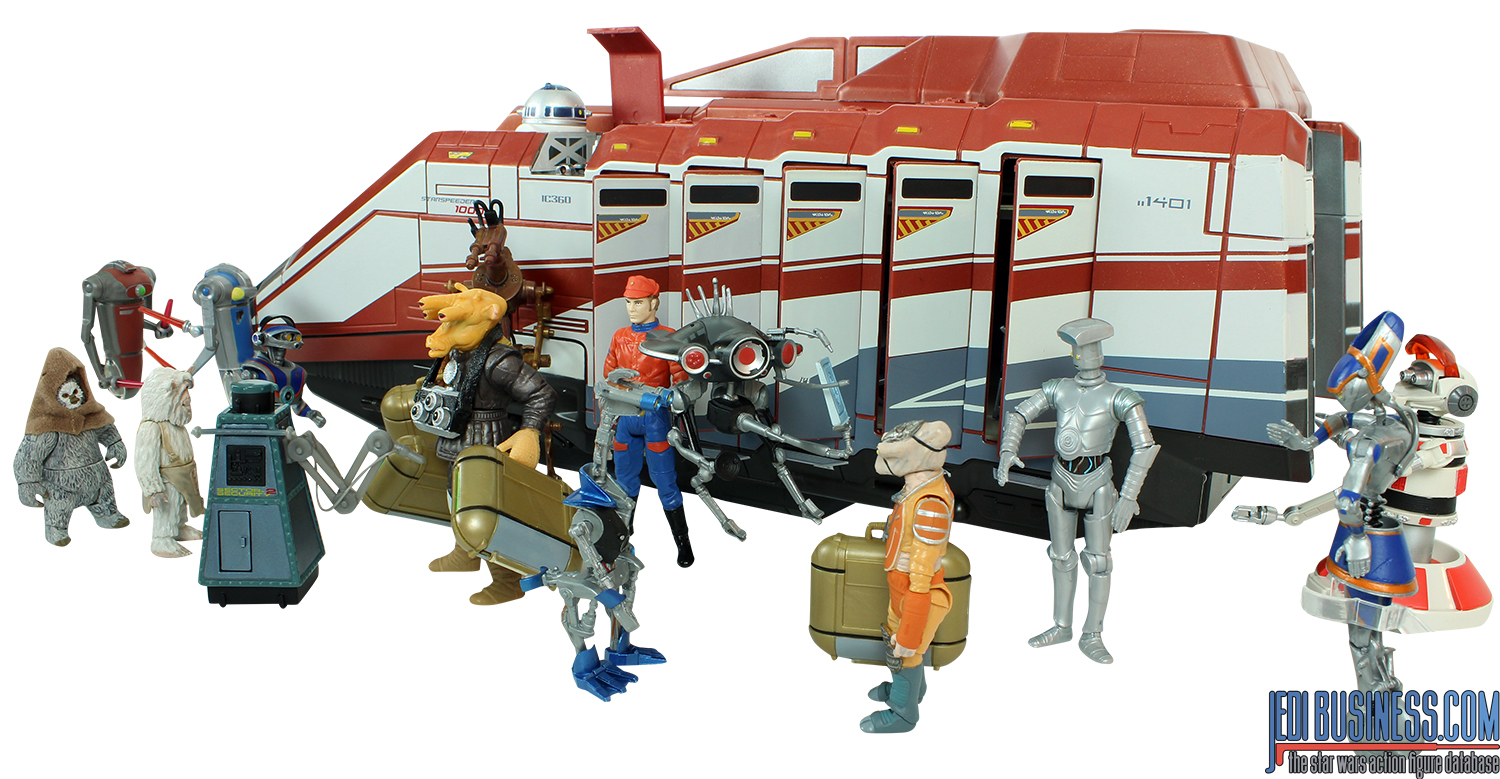 Now Disney, could we please get the STARSPEEDER 3000 in blue/white please? You already have the tooling for the vehicle!

Here is more information about STAR TOURS figures and the STARSPEEDER 1000 vehicle: