Join Us For A Look At The AT-ST RAIDER

The AT-ST Raider was a surprise announcement during Lucasfilm's Triple Force Friday Preview event on September 26th, 2019. The vehicle was released only a few weeks later exclusively at Best Buy stores on November 1st, 2019 for $79.99. Unlike many other Star Wars vehicles which don't include a figure, this AT-ST Raider included an exclusive 3.75" Klatooinian Raider figure which came packaged in a plastic baggie inside the box.

Before we look at the vehicle's features, let's have a look at the beautiful Kenner-inspired packaging first. 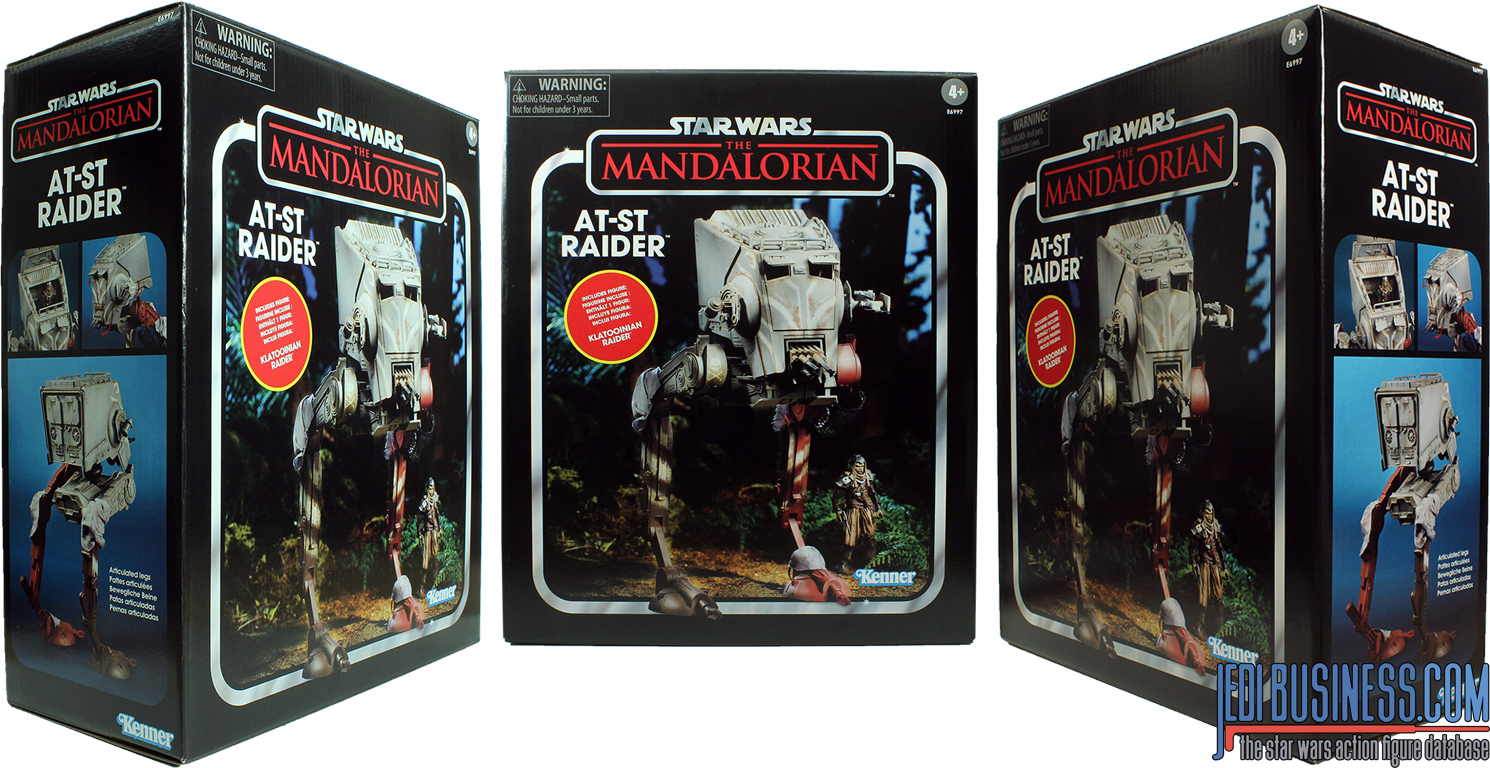 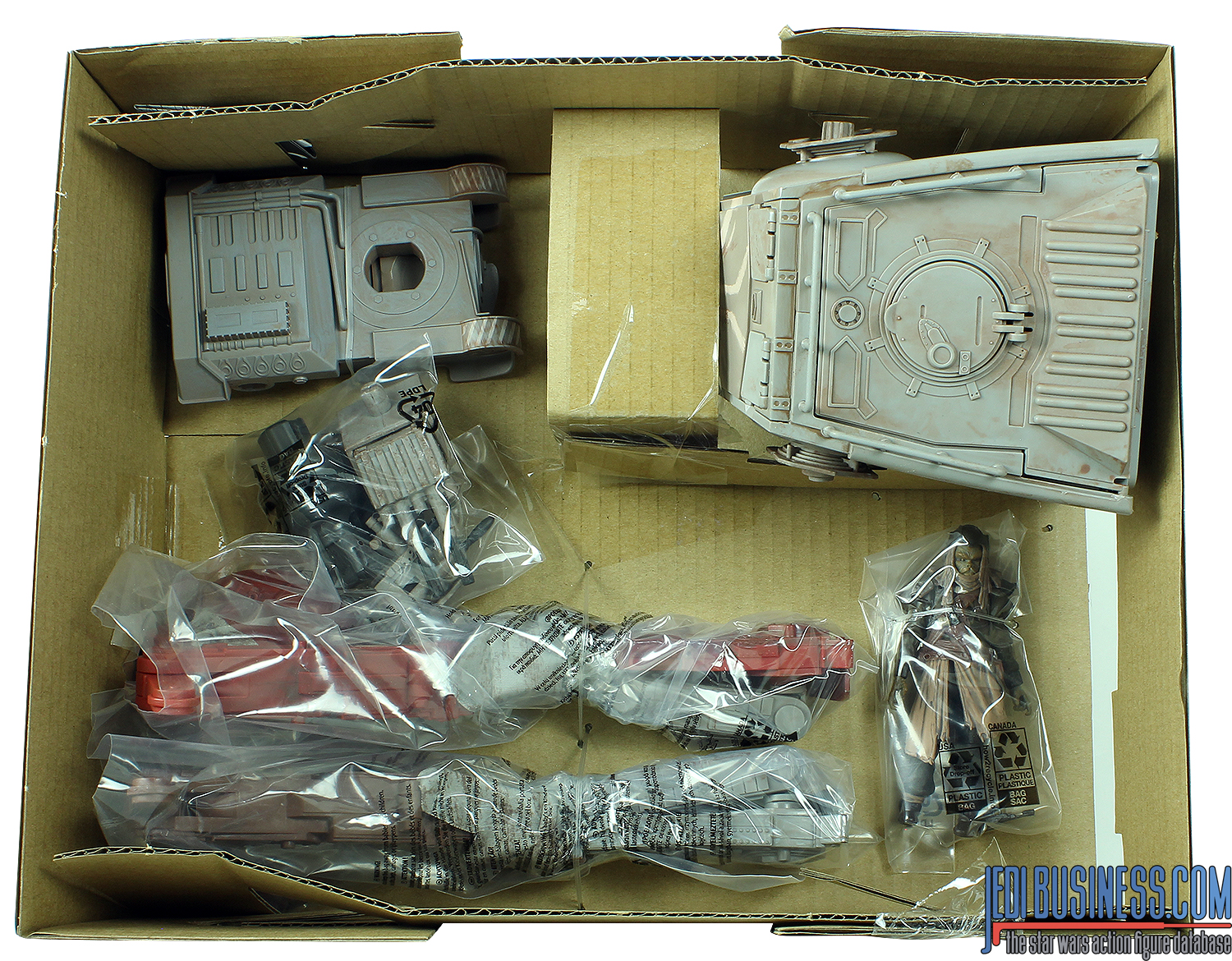 As you can see, the packaging looks very Return Of The Jedi inspired, which is always a good thing! :) 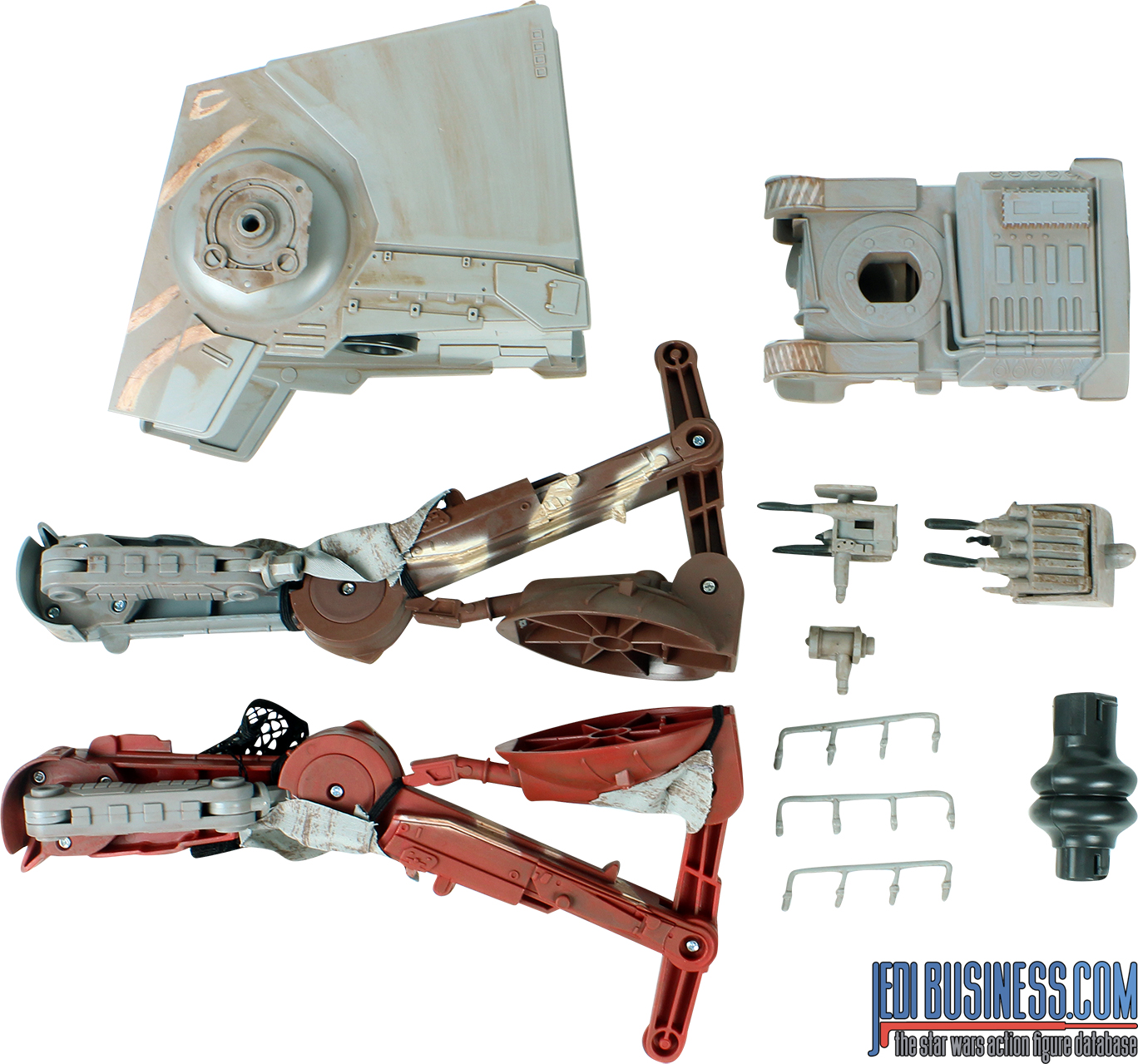 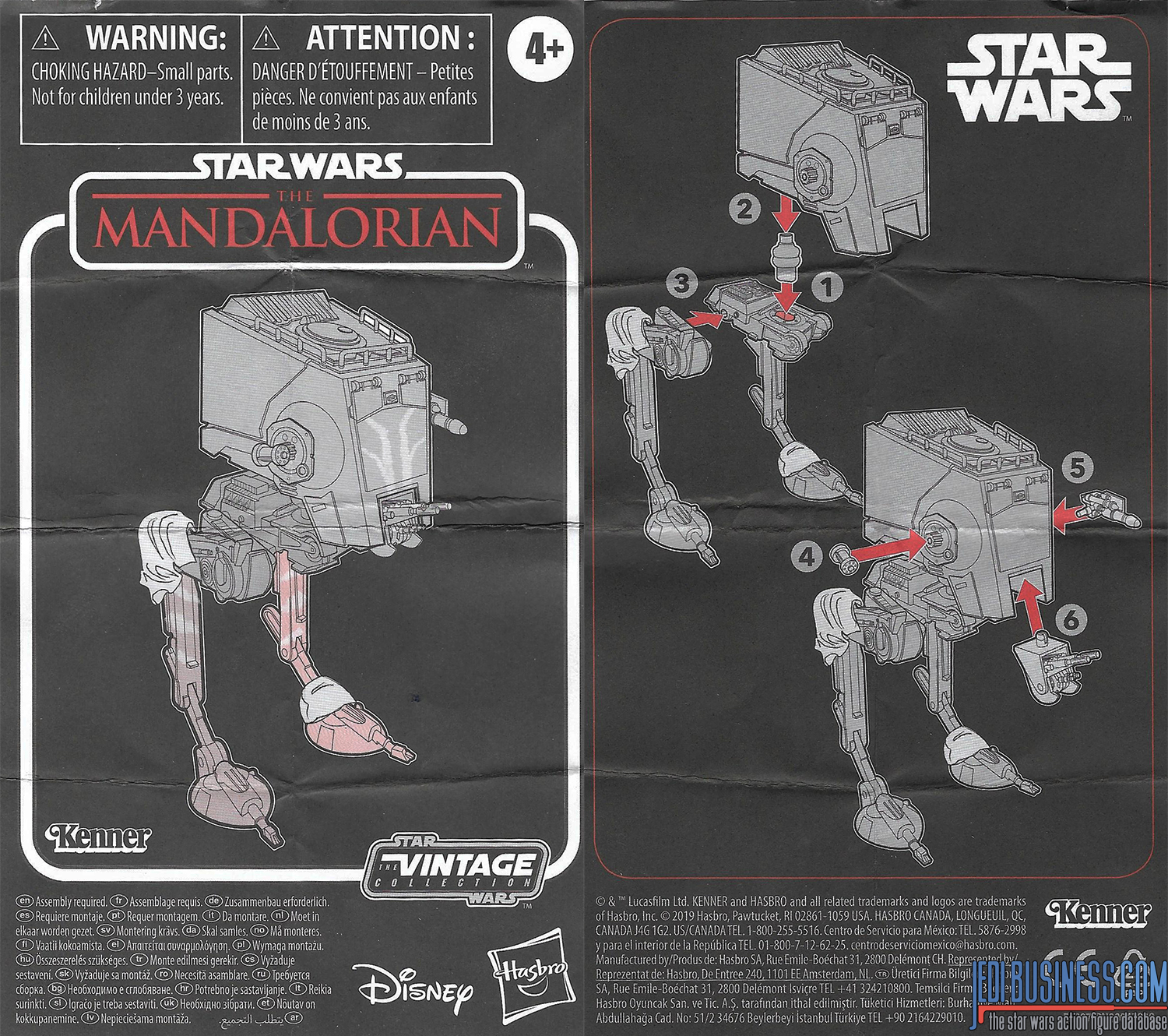 The assembly is easy and there are no stickers which need to be applied. The trickiest part was to get the legs just right so that the AT-ST Raider balanced out without falling over. Here is a picture of what the AT-ST Raider looks like fully assembled: 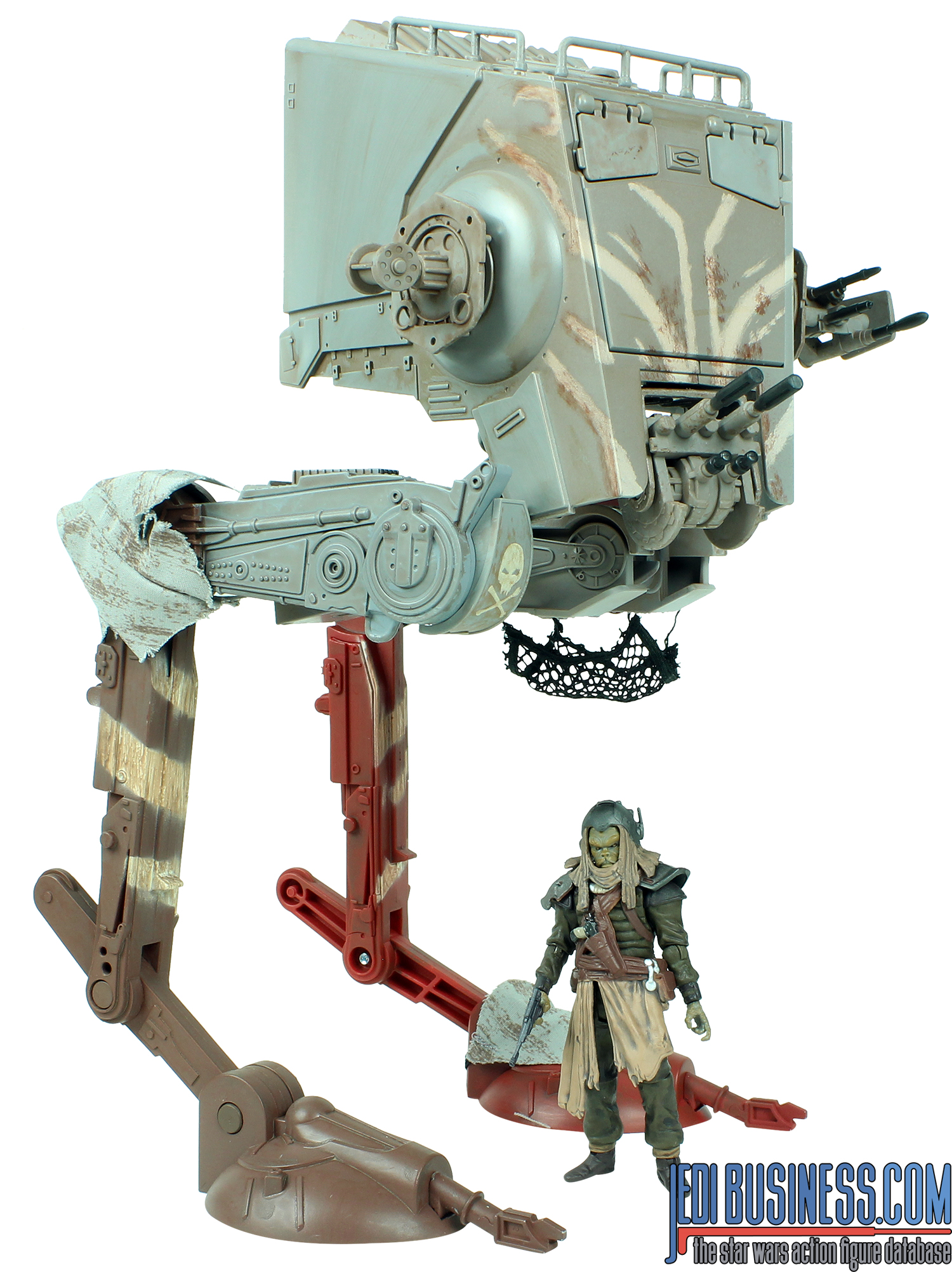 The AT-ST has a lot of movable parts, it's possible to rotate head, open the cockpit canopy and the canopy hatch, the rocket launcher and the laser cannon on either side on the outside of the cockpit can be rotated, the laser cannon on front swivels up and down and the legs have multiple points of articulation for a variety of different stances. It was tricky to get the vehicle to stand up properly, but after a while it worked out fine and the legs were able to keep the weight of the head and body up fine.

The paint application and the extra accessories included with the vehicle make this release different from previously released AT-ST vehicles, it has a brown and dark red leg with painted patterns on them, there is a skull on the front of one leg, there is a net hanging down from one side, there are soft-goods coverings for parts of legs and feet,  and the great looking wash and weathering, it all adds up to a very cool and unique looking version of the AT-ST.

Here is a look at the detailed head and the paint application on it: 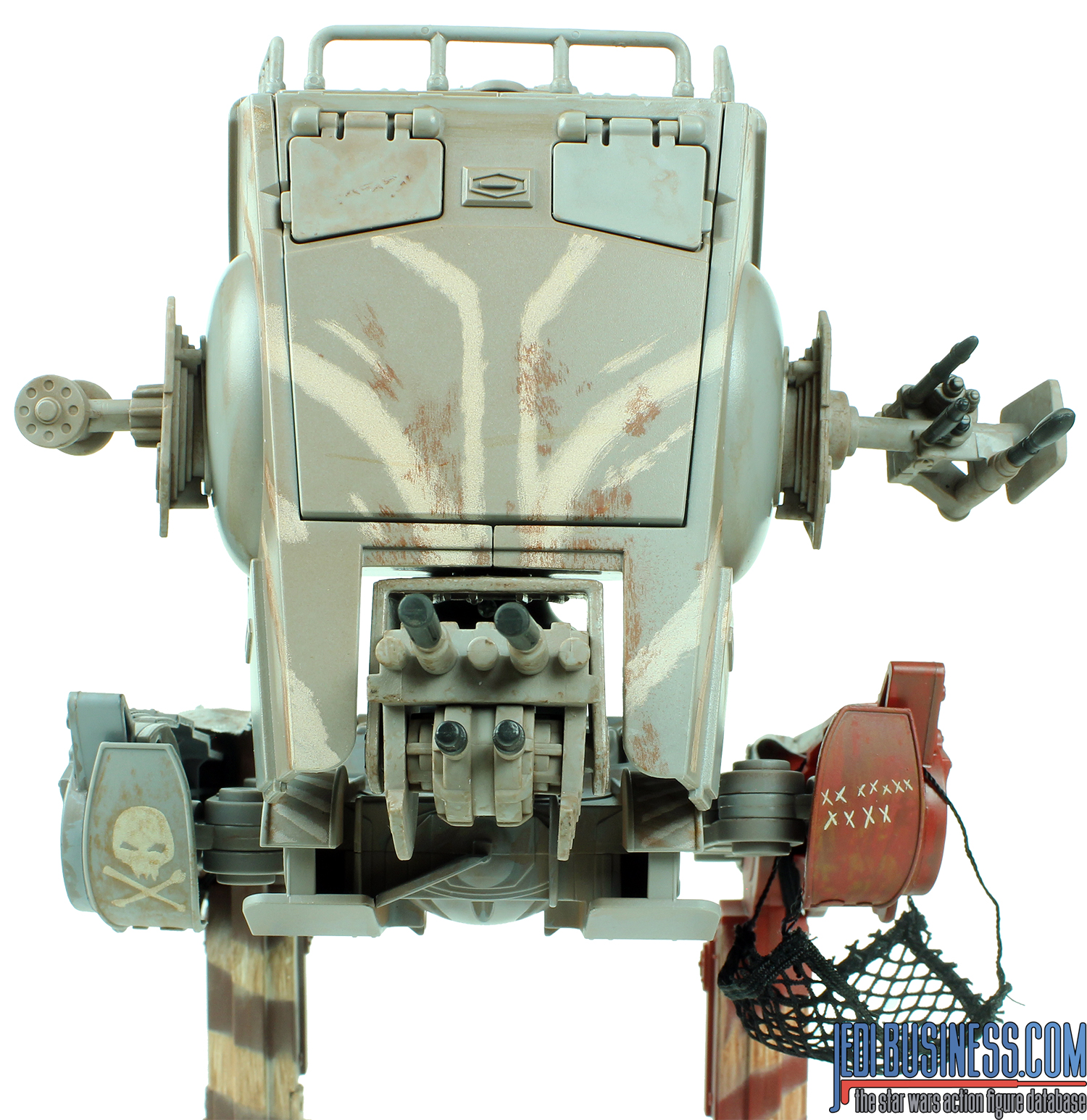 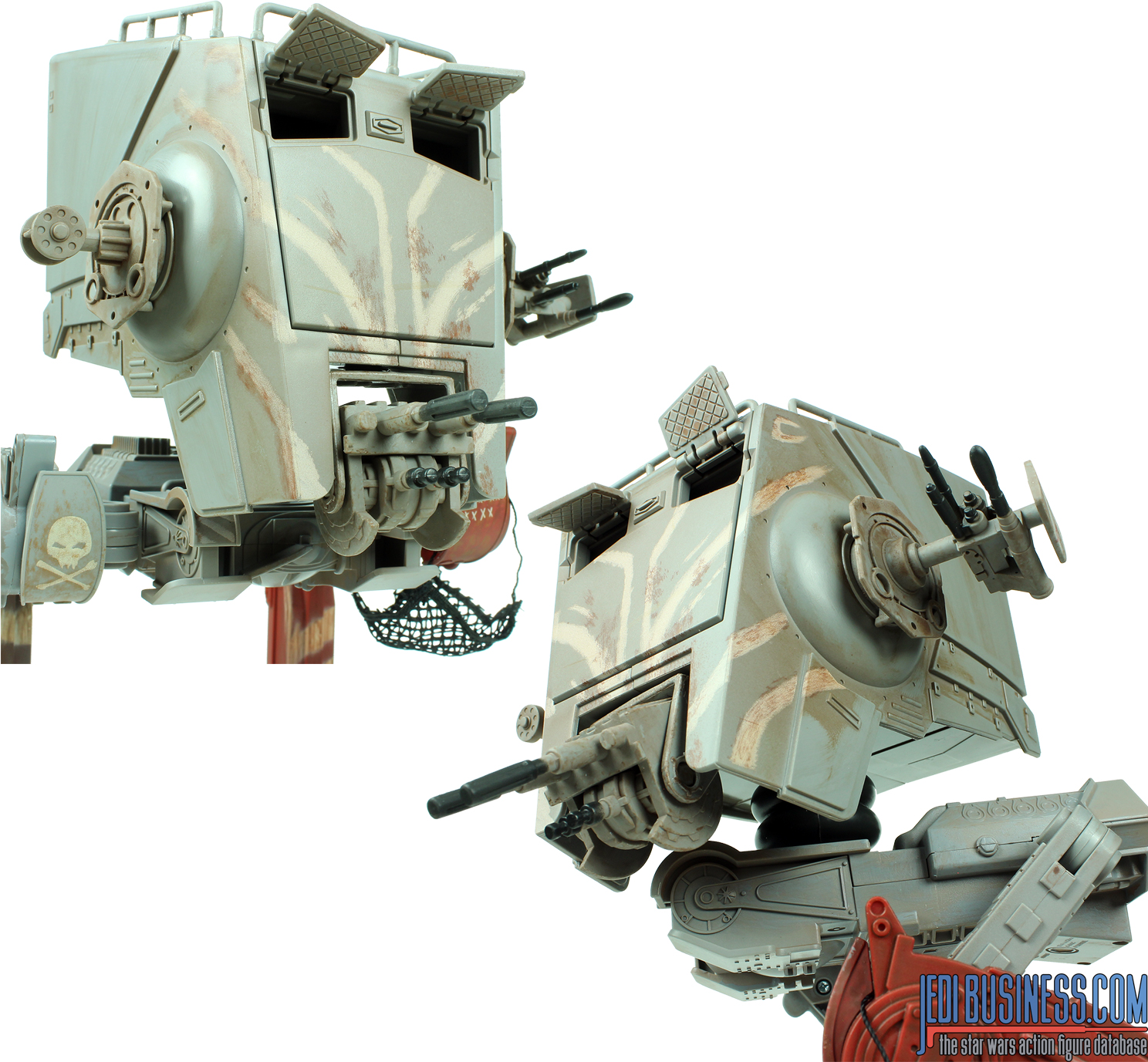 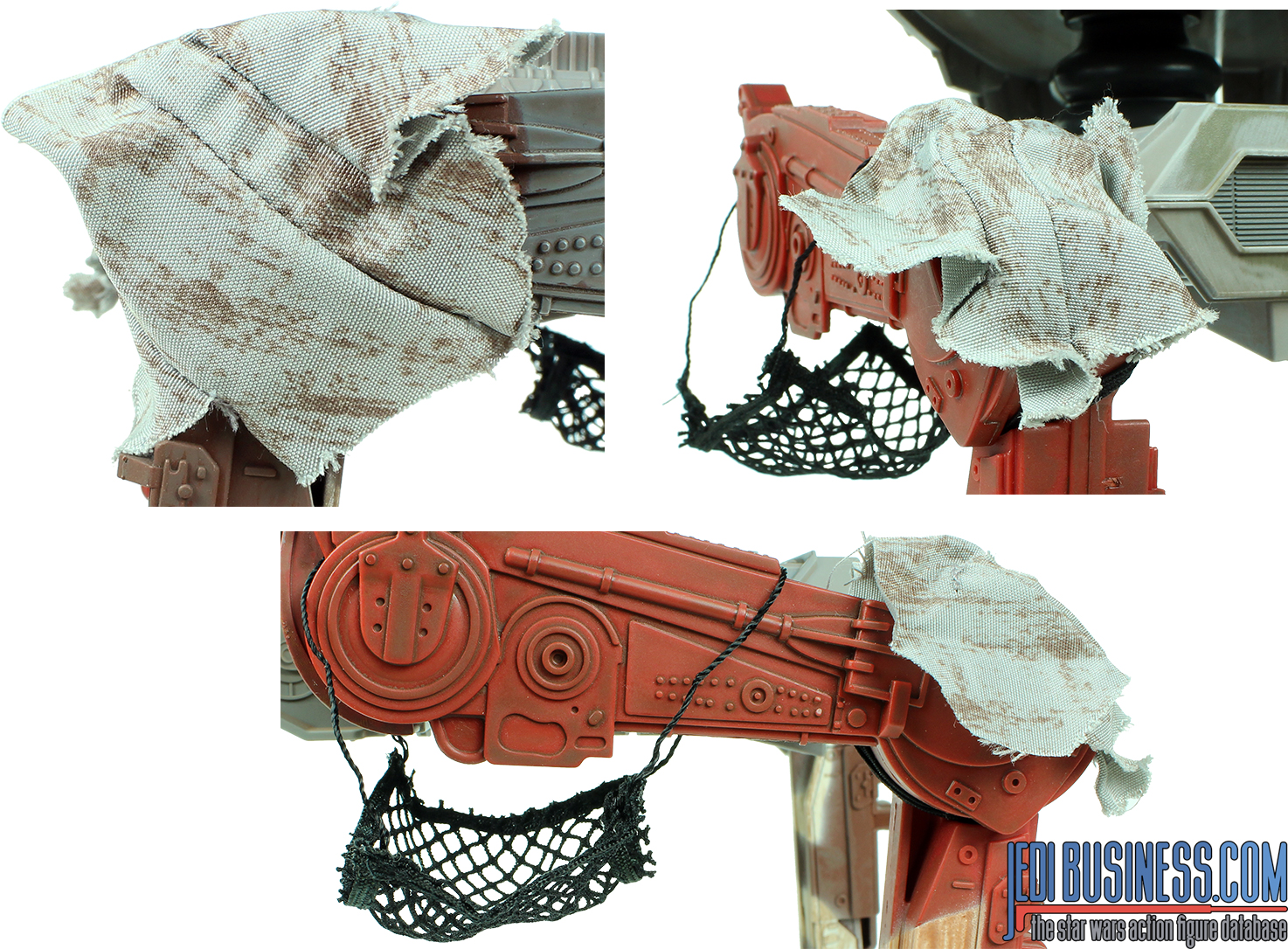 The cockpit interior in particular looks amazingly detailed and rundown at the same time. The included Klatooinian Raider figure fits tightly into the seats, but it does fit. The interior is different from other released AT-ST vehicles, there is a skull on the wall and different looking controls. The attention to detail which was put into the painting and detailing of the cockpit is appreciated, because those details are hidden when it's on display. 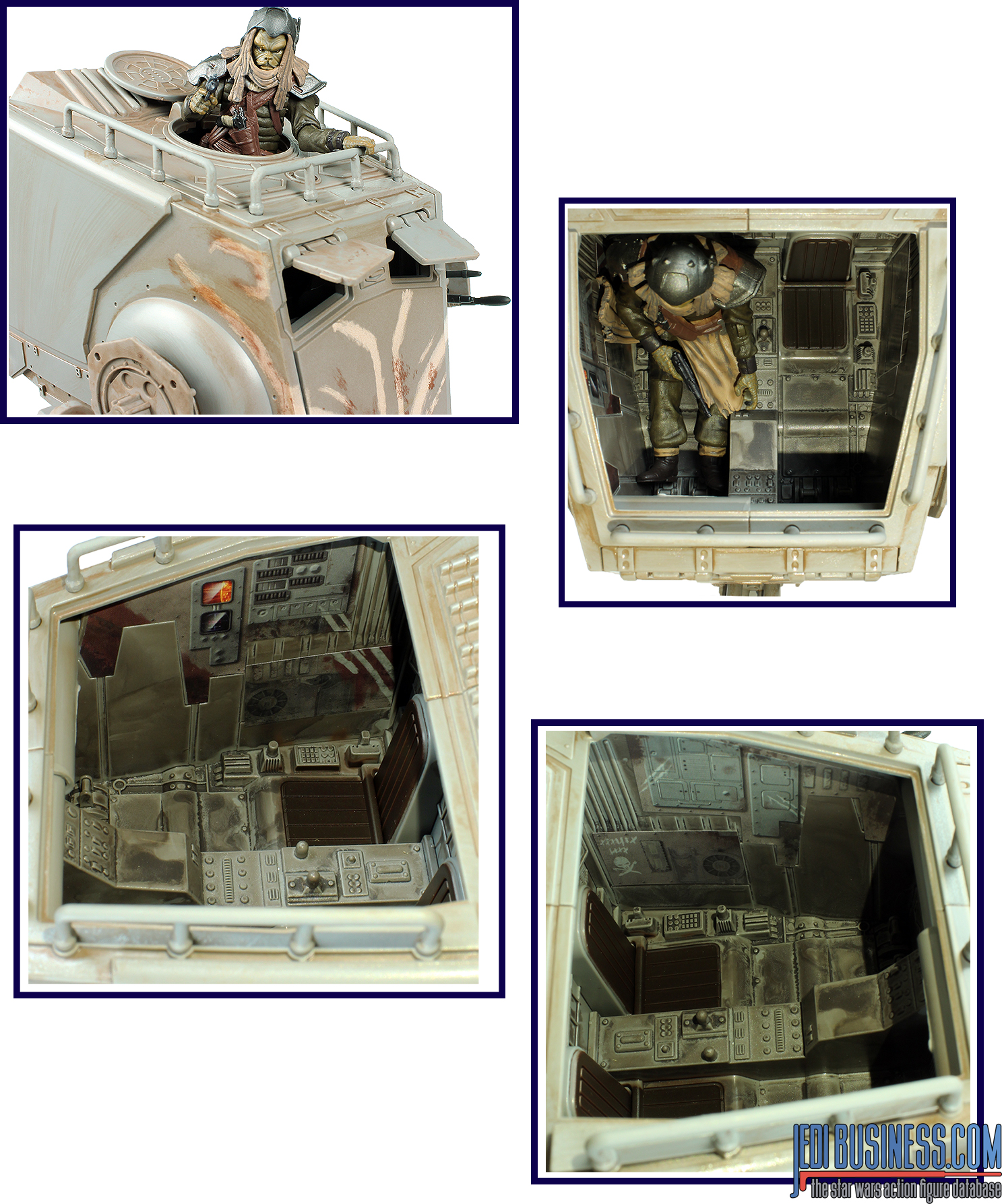 The included Klatooinian Raider figure looks great, it comes with a removable hat and a blaster and look how cool the weathering looks on the outfit! 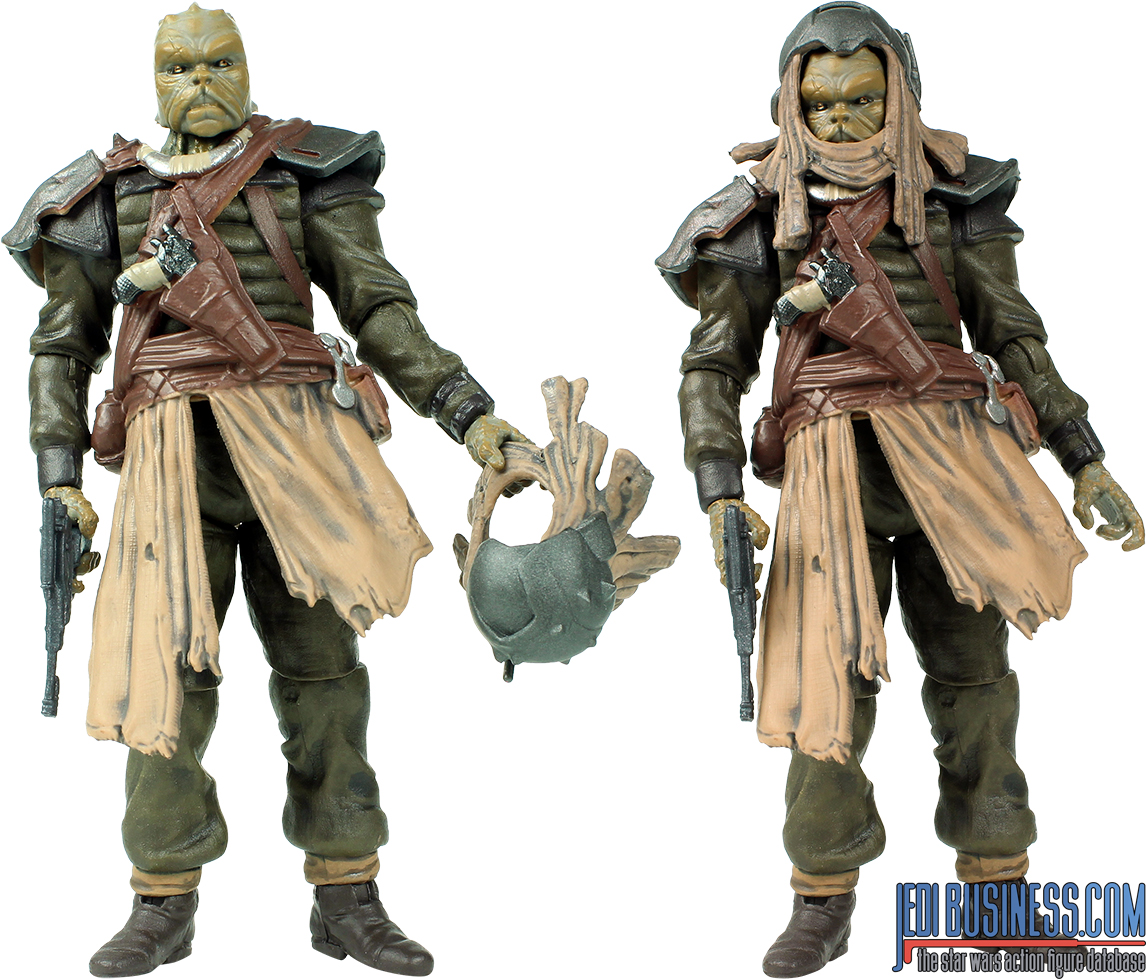 If you own the previously released Vintage Collection AT-ST you already know what you are getting with this release. Same thing, but different paint application, more accessories, plus an exclusive figure and unique packaging. Currently this is the only vehicle and figure from The Mandalorian TV series in the 3.75" line which is available, and we have to wait until 2020 for the Mandalorian himself, Cara Dune and a remnant Stormtrooper. There might be more, but this is it for now. We all have differently sized wallets, and the price of $79.99 feels about $30 too high. However, it is a well made vehicle, the detailing, the paint application, it's all there and it looks great on display.

Where To Go Next?