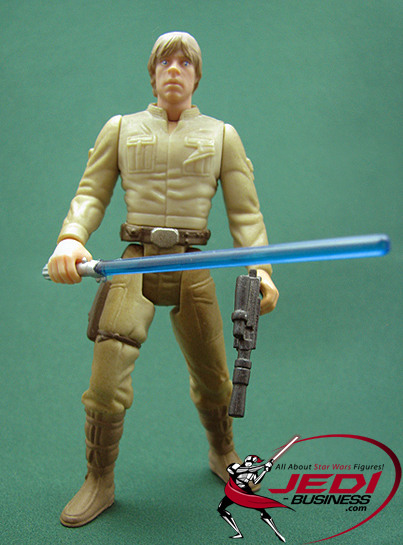 This Luke Skywalker in Bespin Gear was released individually carded during the The Power Of The Force 2 toy line in 1998. The figure is based on Luke's appearance in The Empire Strikes Back, while he was trying to rescue his friends on Bespin.

Bespin Luke has 7 points of articulation, including swivel joints in the neck, shoulders, the right wrist, waist and both legs.

A nice hidden feature is the removable right hand which allows the figure to get "battle damaged" when fighting Darth Vader. The hand can easily be unplugged from the arm and it's even easier to place it back into the socket.

There are no ball-joints, and no joints in the elbows, knees or ankles. The figure stands surprisingly well on its own with the right leg placed forward. Both weapons, the blue lightsaber and the bulky blaster fit well into each of Luke's hands.

The paint application on Skywalker is only average with various shades of brown on his outfit. When you take a closer look you'll notice the spray paint pattern on the arms and legs. The figure's sculpt is quite outdated compared with modern Star Wars figures, especially the wide shoulders look off and the head sculpt doesn't look like Luke Skywalker. All in all, if you are looking for a more articulated and more accurate representation of the character, there are better choices available today.

It should be noted that when this figure was first released back in 1998, collectors were excited about it. Getting an articulated wrist and being able to position the lightsaber differently in Luke's hand was truly fantastic at the time. Despite the figure's shortcomings, it still ranks as a personal favorite here at JediBusiness.com.

Sensing his friends are in critical danger, Luke Skywalker ventures to Cloud City before finishing his Jedi training. Unbeknown-st to him, Darth Vader has prepared an elaborate trap with the darkest of intentions.