A Look At The TVC Imperial Troop Transport

Hasbro surprised everybody by releasing the Vintage Collection Imperial Troop Transport from one day to the other in early February 2020, right before Toy Fair in New York City. Several online retailers took pre-orders and Entertainment Earth even had it in-stock on the same day it was revealed. This was a nice surpise and close to a miracle because no images of the vehicle had leaked prior to the reveal. The Imperial Troop Transport cost $69.99 at release and was only available online.

The vehicle is based on the Imperial Troop Transport's appearance in chapter 7 of the first season of the Mandalorian TV series on Disney+.

Here is a look at the beautiful Kenner-inspired packaging which shows the vehicle on the front with the Mandalorian logo on top. The sides of the box show various vehicle features. 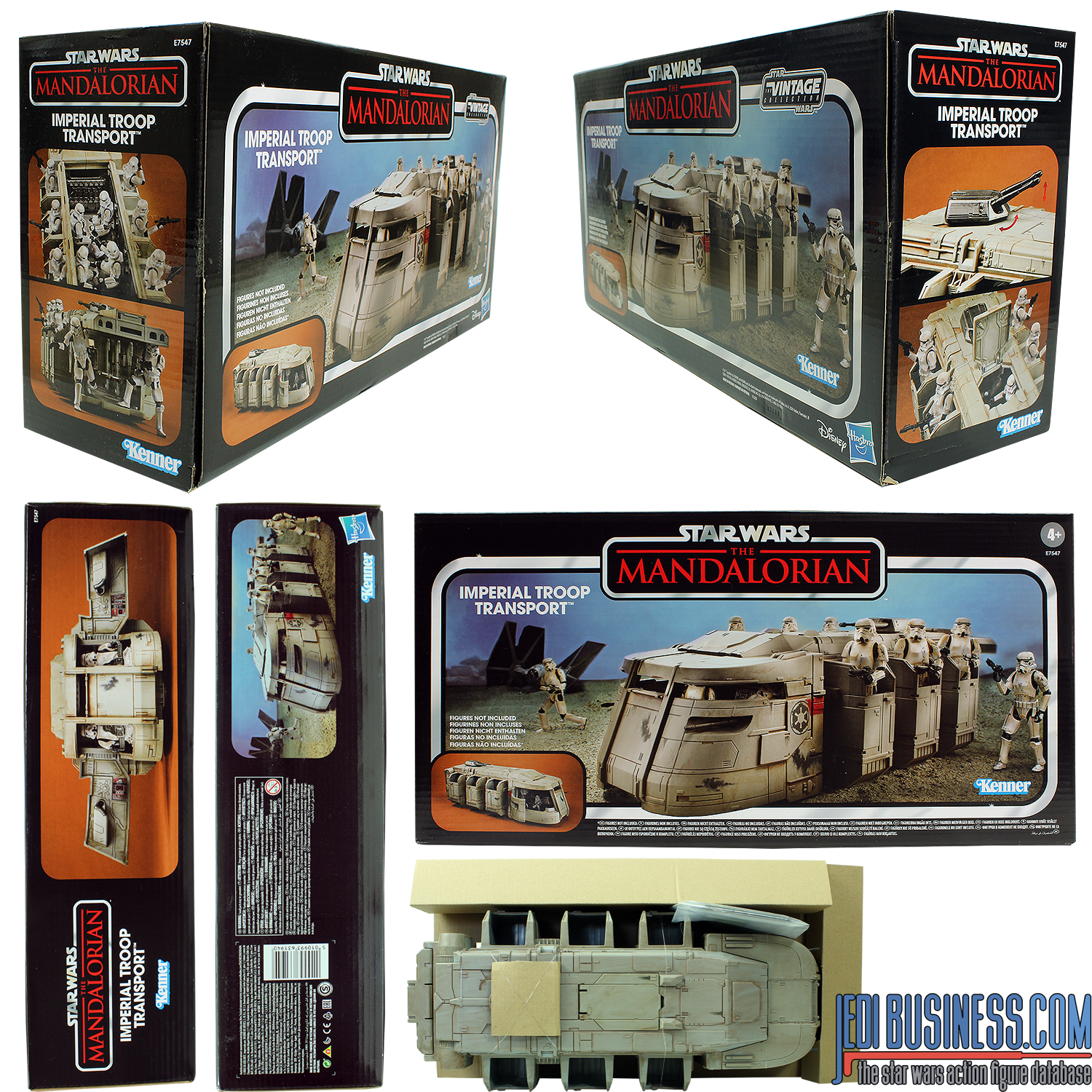 The Imperial Troop Transport comes almost entirely assembled, the only piece which needs to be added is the gun turret on the top of the roof. The stickers inside the cockpit are pre-applied and from taking it out of the box to placing it onto the shelf won't take more than a minute. 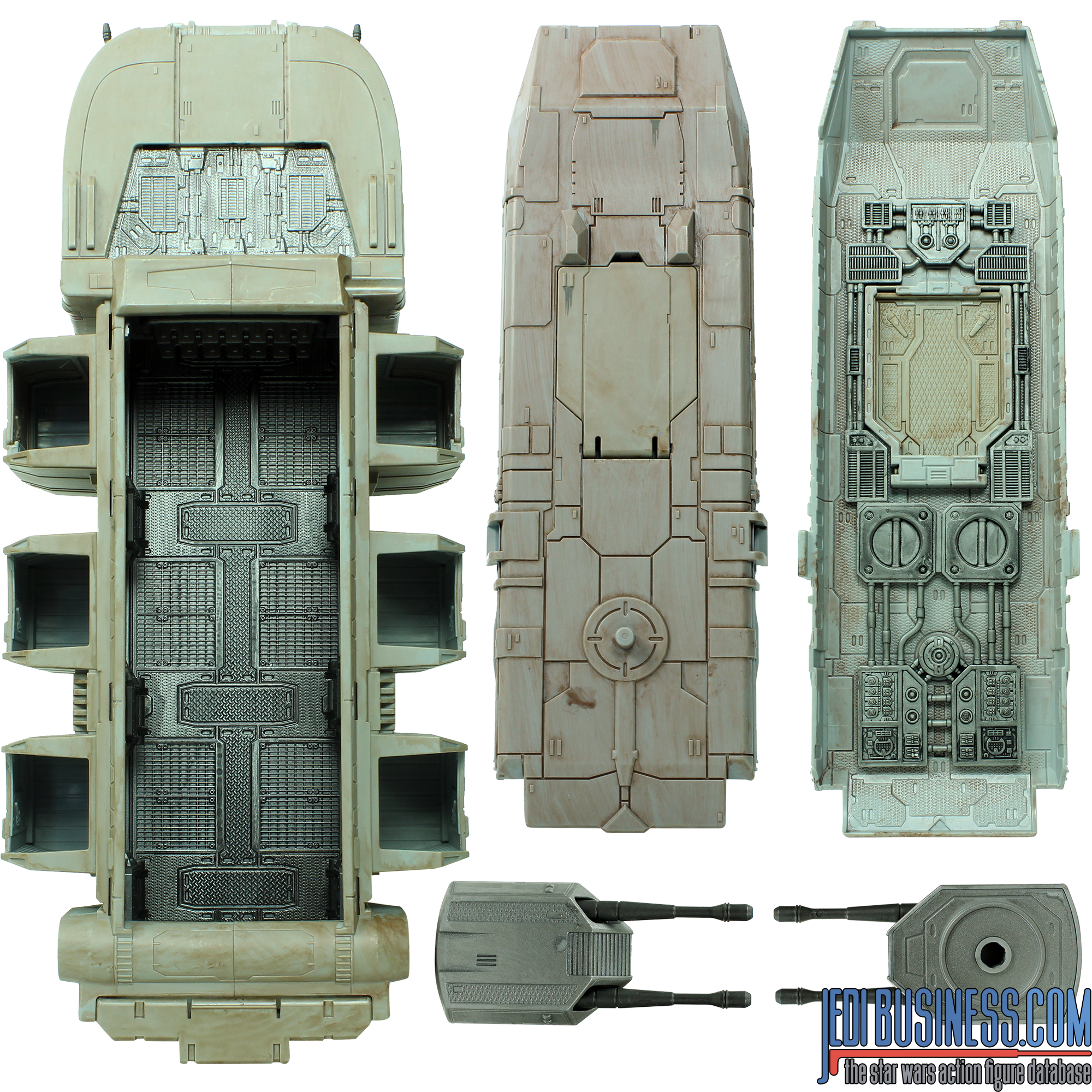 There are six troop compartments, three on each side, where two of the doors can be opened. The two front doors on the vehicle can be opened and pilots can sit on the inside to drive the vehicle. The roof has a built-in hatch where a troop can look out from. The roof can be taken off to allow access to the interior, and on the inside there are six seats with four of them being functional (they can be folded up or down). The gun turret on the top swivels 360° and the lasers can be moved up and down slightly. There are no electronics built-in. 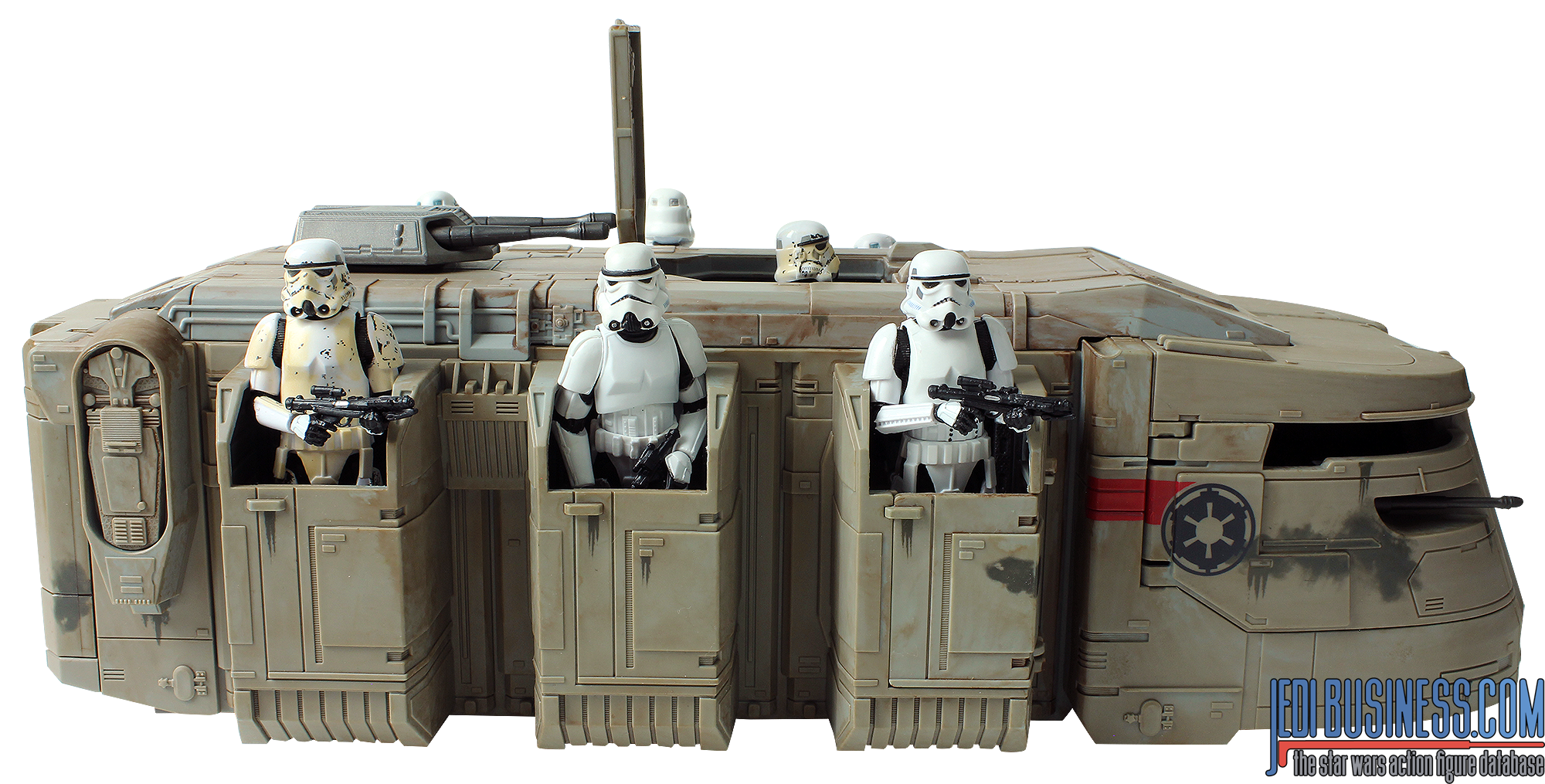 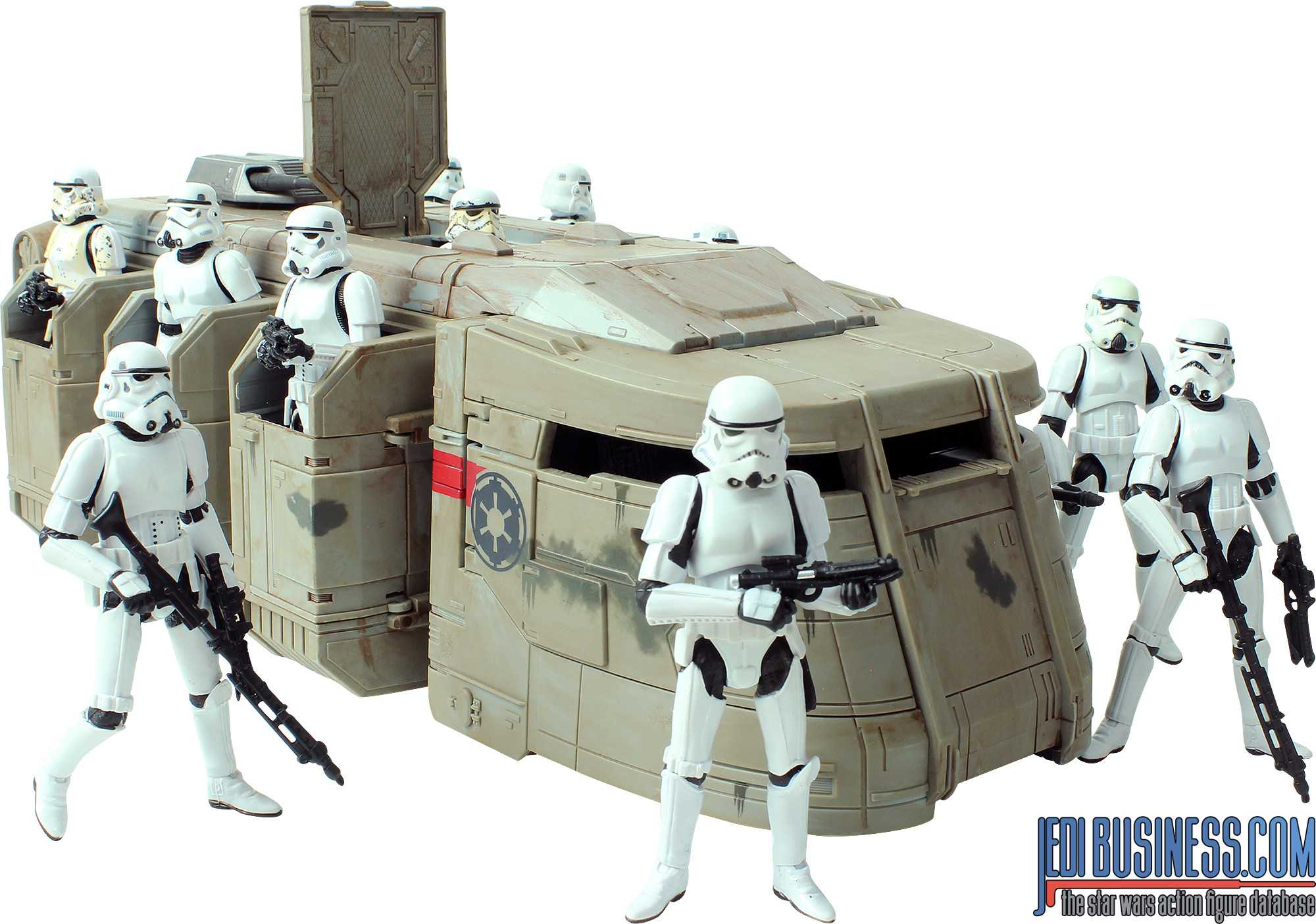 Notice how much taller the 3.75" Stormtroopers are than the Imperial Troop Transport

The paint application looks great with lots of dirt on the vehicle and a paint scheme which matches the on-screen counterpart well. The details on the interior, from the weapons rack to the fold-down seats and the details in the ceiling, it all looks nice. The stickers look cool and luckily they have been pre-applied. 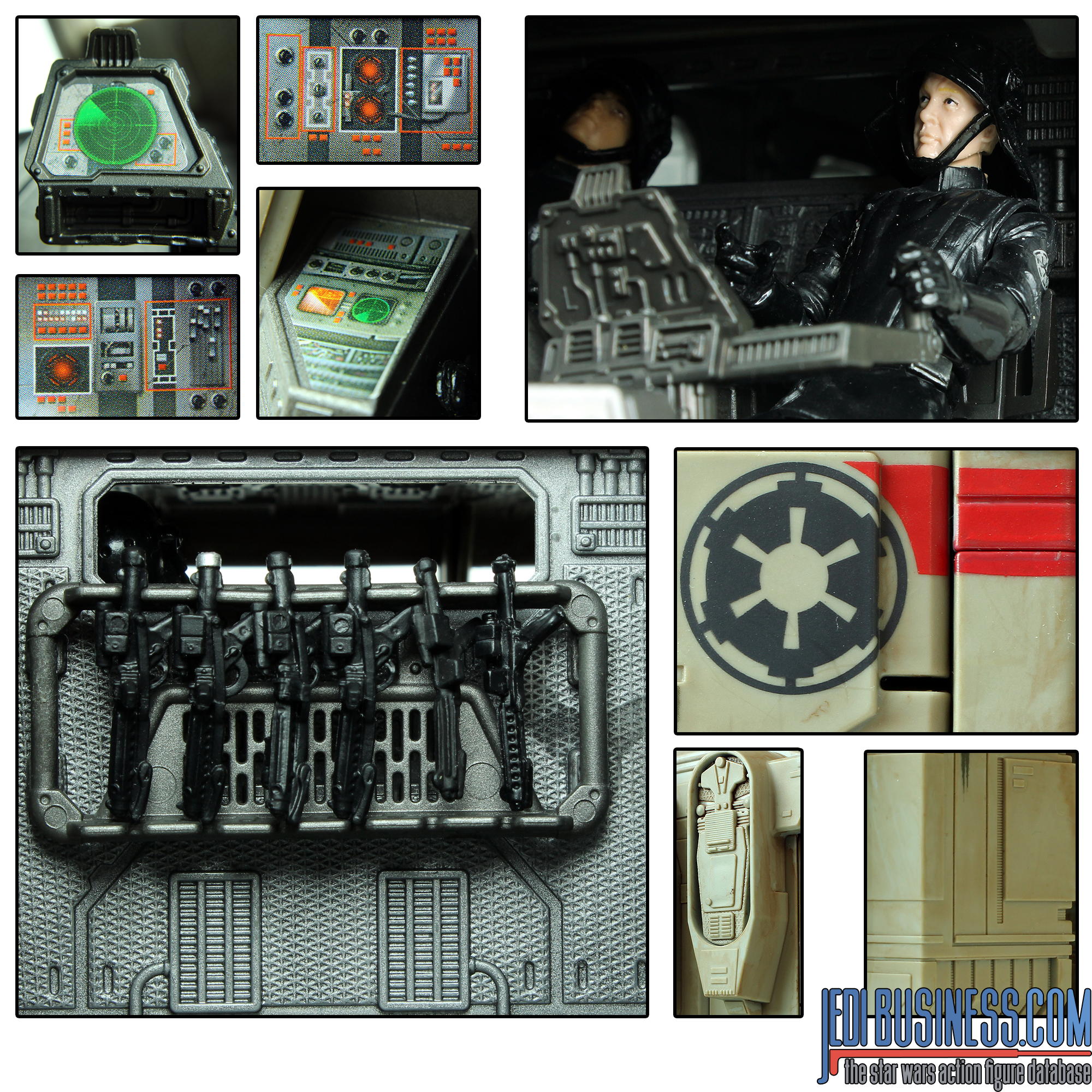 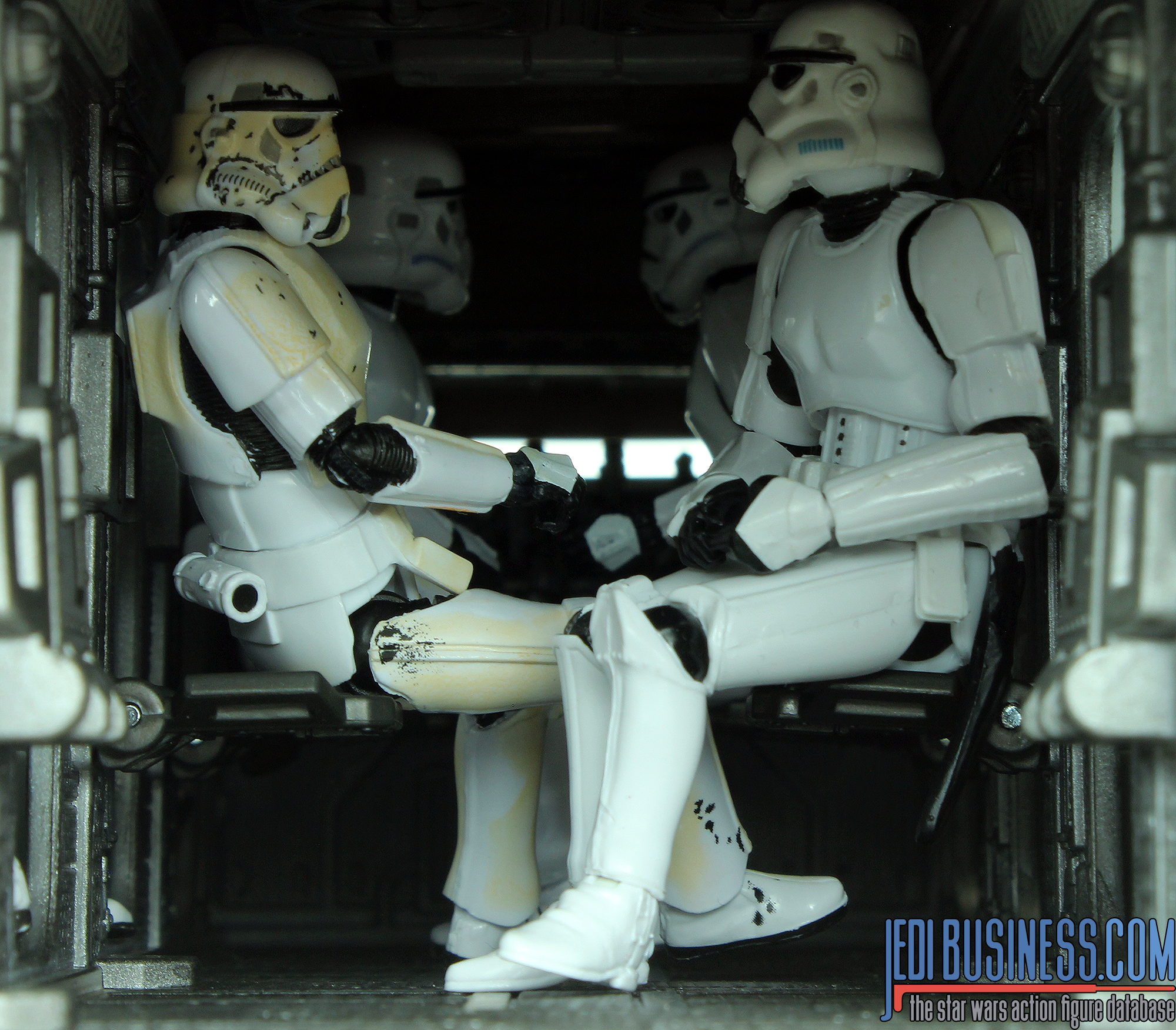 Unfortunately, the Imperial Troop Transport is too small. Figures can't stand on the inside and they barely have room to sit across from each other. They can't walk out of the doors properly and the pilots need to be cramped into the pilot seats (older figures with no knee articulation will not fit). 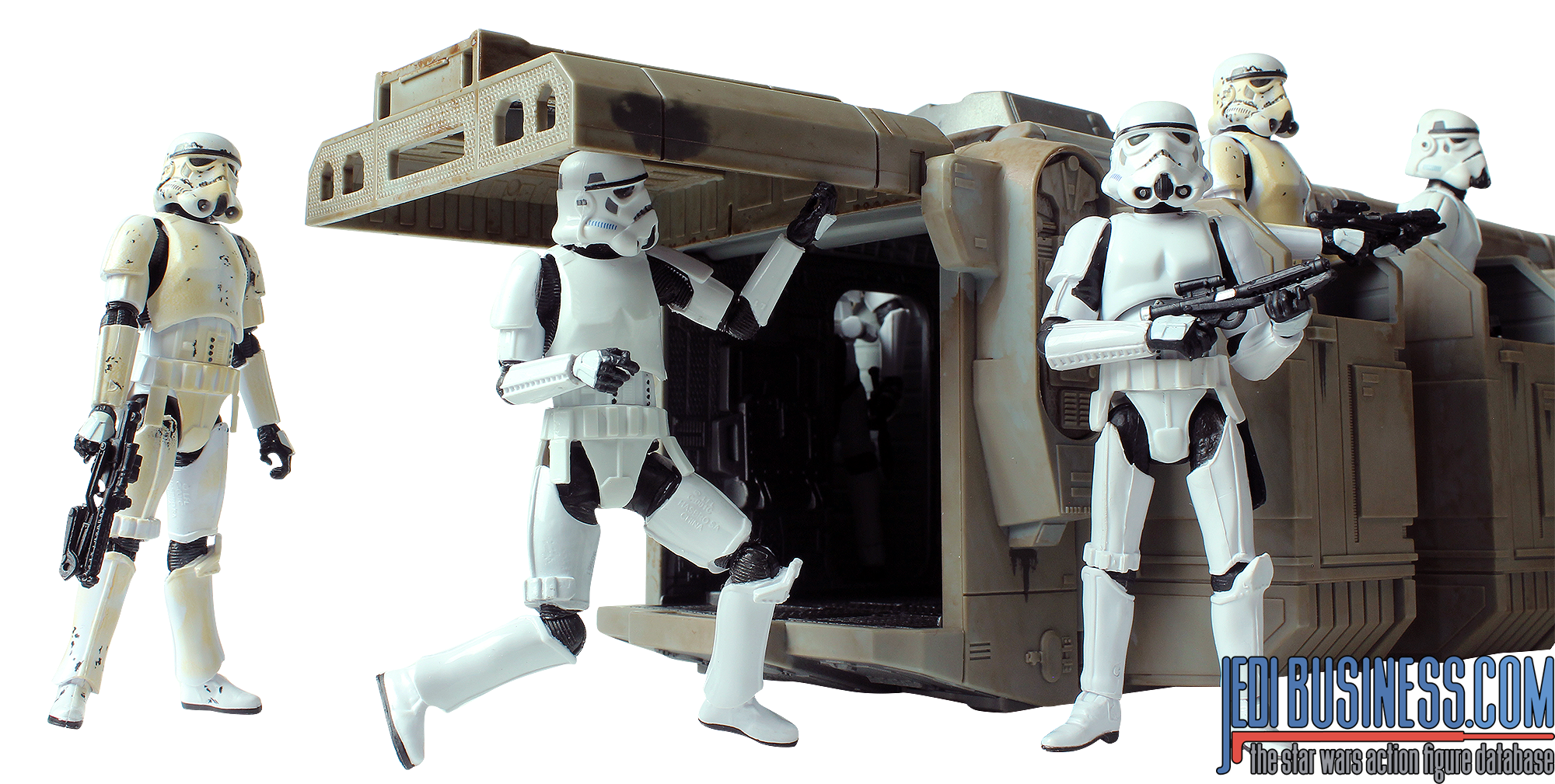 All in all the Vintage Collection Imperial Troop Transport is a nice vehicle, and if it had been about 1/4 bigger it would have been a home run. It would have been nice to see six swing doors for the troop compartments instead of two, six fold-down chairs instead of four, and a vehicle height which could have accommodated Stormtroopers properly so that they can stand on the inside. Those issues aside, it's a nicely detailed and beautifully painted vehicle which looks great with a bunch of troops standing around next to it.

You can get the vehicle on Amazon, or check Entertainment Earth here.